Giant Propeller in A Ring 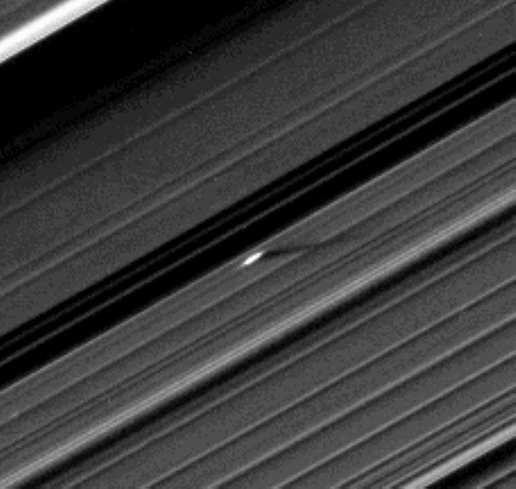 An unusually large propeller feature is detected just beyond the Encke Gap in this Cassini image of Saturn's outer A ring taken a couple days after the planet's August 2009 equinox.

The unique geometry of equinox has thrown into relief small moonlets within the rings and the structures they create around them. Propeller-like features, a few kilometers long, centered on and created by the action of small embedded moonlets only about 100 meters across, were discovered early in the mission (see PIA07792 and PIA07790). These previous findings constituted the first recognition of the presence in Saturn's rings of bodies bigger than the largest ring particles (about 10 meters, or 30 feet, across) but smaller than the 8-kilometer-wide (5-mile-wide) ring moon, Daphnis, in the outer A ring.

From the 350-kilometer (220-mile) length of the shadow cast by this 130-kilometer-long (80-mile-long) propeller, the heights of these features above the ring plane have been measured to reach about 200 meters (650 feet), indicating the moonlet responsible for the propeller in this image is likely to be 400 meters (1,300 feet) across. (A second version of the image, cropped and zoomed-in by a factor of two, has also been included.)

A previously released early-equinox image also had revealed a moonlet in the outer B ring about 400 meters (1,300 feet) across (see PIA11665).

Cassini scientists have tracked several individual propeller moons embedded in Saturn's A ring over several years. The A ring is the outermost of Saturn's main rings. Imaging scientists nicknamed the propeller shown here "Earhart" after the American aviatrix Amelia Earhart. See PIA12790 for an earlier view of this propeller.

It has since become a growing realization resulting from Cassini's exploration of Saturn that the objects forming Saturn's rings very likely span the full spectrum of sizes, from the smallest dust-sized ring particles to the ring-moons like Daphnis and 29-kilometer-wide (18-mile-wide) Pan -- a significant advance in divining the origin of Saturn's rings.

The novel illumination geometry that accompanies equinox lowers the sun's angle to the ring plane, significantly darkens the rings, and causes out-of-plane structures to cast long shadows across the rings. (The rings have been brightened in this image to enhance visibility.) These scenes are possible only during the few months before and after Saturn's equinox which occurs only once in about 15 Earth years.

The image was taken in visible light with the Cassini spacecraft narrow-angle camera on Aug. 13, 2009. The view was acquired at a distance of approximately 1.2 million kilometers (746,000 miles) from Saturn and at a sun-Saturn-spacecraft, or phase, angle of 87 degrees. Image scale is 7 kilometers (4 miles) per pixel.

The Cassini-Huygens mission is a cooperative project of NASA, the European Space Agency and the Italian Space Agency. The Jet Propulsion Laboratory, a division of the California Institute of Technology in Pasadena, Calif., manages the mission for NASA's Science Mission Directorate, Washington, D.C. The Cassini orbiter and its two onboard cameras were designed, developed and assembled at JPL. The imaging operations center is based at the Space Science Institute in Boulder, Colo.

For more information about the Cassini-Huygens mission visit http://saturn.jpl.nasa.gov/. The Cassini imaging team homepage is at http://ciclops.org.