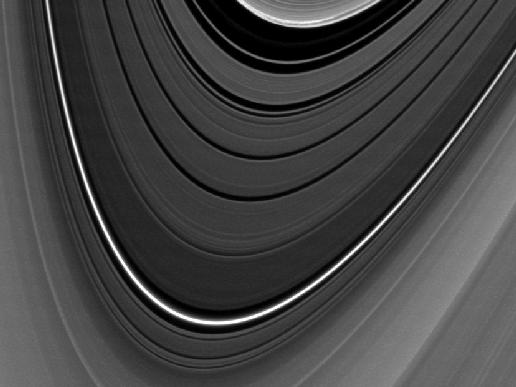 Strange Things Afoot in the B Ring

The outer edge of Saturn's B ring exhibits an unexpected feature in this movie made from images captured by NASA's Cassini spacecraft. The images were obtained early in the planet's equinox ""season"" -- the period leading up to and away from August 11, 2009 when the sun was over the planet's equator and lit the rings exactly edge on.

It is apparent in the movie that the outer B ring edge location varies with time. For a more detailed view and explanation for this behavior, see PIA12794.

But, about halfway through, an unusual, 20,000-kilometer-long (12,000-mile-long), chevron-shaped structure can be seen moving along the B ring edge. Higher resolution images, taken during equinox, have shown that this region is the site of vertical structures, as tall as 3.5 kilometers (2.2 miles), whose existence was betrayed by long shadows (see PIA11668).

Cassini imaging scientists found that this chevron feature is one of two sites at the B ring's outer edge that does not follow any of the three newly discovered rotating patterns distorting the ring's edge or another pattern previously known to be caused by the moon Mimas. They have found instead that it orbits Saturn as would an independently orbiting body. As a result, scientists conclude that these are likely sites of massive bodies, or moonlets, embedded near the ring's edge but independently orbiting Saturn. In the particular region shown in this movie, the moonlets are likely big enough to cause ring material streaming past them to be excessively compressed and thrown vertically as a result. The moonlets themselves can't be seen.

This interpretation is supported by Cassini's previous discovery of a moonlet embedded in this region of the B ring (see PIA11665). The imaged moonlet, whose size is estimated at 300 meters (1,000 feet) across, was found only because it was betrayed by the shadow it cast during Saturn's August 2009 equinox period.

This view looks toward the southern, sunlit side of the rings from about 4 degrees below the ring plane.

The movie is a concatenation of 39 images taken about 2 minutes, 40 seconds apart, over the span of 1 hour, 40 minutes. The images, taken on Feb. 25, 2009, were re-projected into the same viewing geometry.

The images were taken in visible light with the Cassini spacecraft narrow-angle camera. The view was obtained at a distance of approximately 822,000 kilometers (511,000 miles) from Saturn and at a sun-Saturn-spacecraft, or phase, angle of 154 degrees. Image scale is 5 kilometers (3 miles) per pixel.

The Cassini-Huygens mission is a cooperative project of NASA, the European Space Agency and the Italian Space Agency. The Jet Propulsion Laboratory, a division of the California Institute of Technology in Pasadena, manages the mission for NASA's Science Mission Directorate, Washington, D. C. The Cassini orbiter and its two onboard cameras were designed, developed and assembled at JPL. The imaging operations center is based at the Space Science Institute in Boulder, Colo.

For more information about the Cassini-Huygens mission visit http://www.nasa.gov/cassini and http://saturn.jpl.nasa.gov . The Cassini imaging team homepage is at http://ciclops.org.