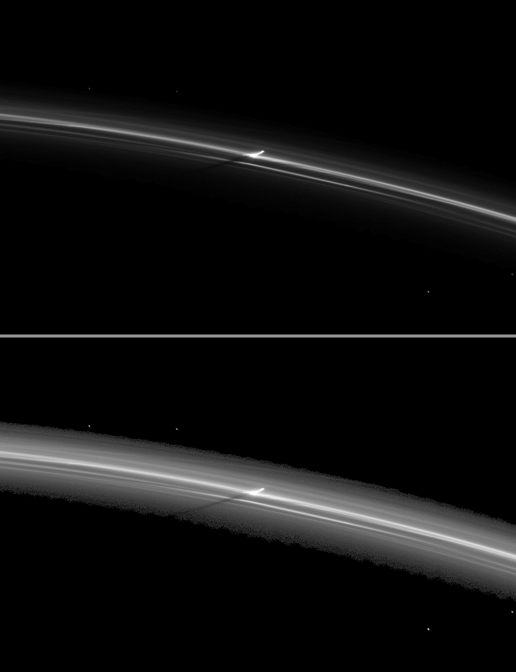 As Saturn approaches its August 2009 equinox, a shadow is cast by a narrow, vertically extended feature in the F ring.

Scientists are working to understand the origin of structures such as this one, but they think this image may show the shadow of an object on an inclined orbit which has punched through the F ring and dragged material along in its path.

The second (bottom) version of the image has been brightened to enhance the visibility of the ring and shadow. Background stars appear elongated in the image because of the camera's exposure time.

This image and others like it (see PIA11663) are only possible around the time of Saturn's equinox which occurs every half-Saturn-year (equivalent to about 15 Earth years). The illumination geometry that accompanies equinox lowers the sun's angle to the ring plane and causes out-of-plane structures to cast long shadows across the rings. Cassini's cameras have spotted not only the predictable shadows of some of Saturn's moons (see PIA11657), but also the shadows of newly revealed vertical structures in the rings themselves (see PIA11654).

This view looks toward the unilluminated side of the rings from about 27 degrees above the ring plane.

The image was taken in visible light with the Cassini spacecraft narrow-angle camera on June 11, 2009. The view was acquired at a distance of approximately 866,000 kilometers (538,000 miles) from Saturn and at a Sun-Saturn-spacecraft, or phase, angle of 30 degrees. Image scale is 5 kilometers (3 miles) per pixel.