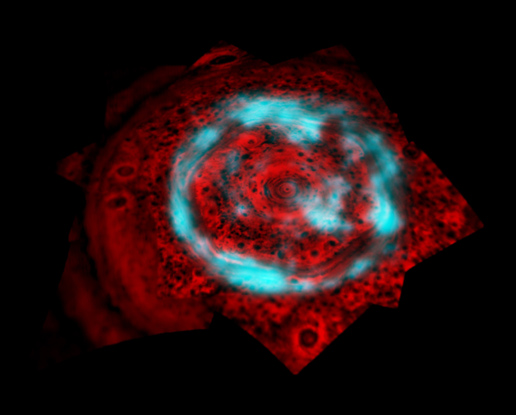 This image of the northern polar region of Saturn shows both the aurora and underlying atmosphere, seen at two different wavelengths of infrared light as captured by NASA’s Cassini spacecraft.

Energetic particles, crashing into the upper atmosphere cause the aurora, shown in blue, to glow brightly at 4 microns (six times the wavelength visible to the human eye).  The image shows both a bright ring, as seen from Earth, as well as an example of bright auroral emission within the polar cap that had been undetected until the advent of Cassini.  This aurora, which defies past predictions of what was expected, has been observed to grow even brighter than is shown here.  Silhouetted by the glow (cast here to the color red) of the hot interior of Saturn (clearly seen at a wavelength of 5 microns, or seven times the wavelength visible to the human eye) are the clouds and haze that underlie this auroral region.  For a similar view of the region beneath the aurora see http://photojournal.jpl.nasa.gov/catalog/PIA09185 .