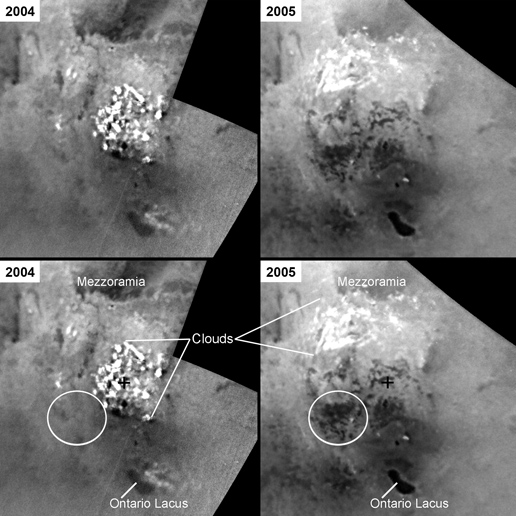 These mosaics of the south pole of Saturn’s moon Titan, made from images taken almost one year apart, show changes in dark areas that may be lakes filled by seasonal rains of liquid hydrocarbons.

The images on the left (unlabeled at top and labeled at bottom) were acquired July 3, 2004. Those on the right were taken June 6, 2005. In the 2005 images, new dark areas are visible and have been circled in the labeled version. The very bright features are clouds in the lower atmosphere (the troposphere). Titan's clouds behave similarly to those on Earth, changing rapidly on timescales of hours and appearing in different places from day to day. During the year that elapsed between these two observations, clouds were frequently observed at Titan's south pole by observers on Earth and by Cassini’s imaging science subsystem (see PIA06124).

It is likely that rain from a large storm created the new dark areas that were observed in June 2005.  Some features, such as Ontario Lacus, show differences in brightness between the two observations that are the result of differences in illumination between the two observations.  These mosaics use images taken in infrared light at a wavelength of 938 nanometers. The images have been oriented with the south pole in the center (black cross) and the 0 degree meridian toward the top. Image resolutions are several kilometers (several miles) per pixel.

The Cassini-Huygens mission is a cooperative project of NASA, the European Space Agency and the Italian Space Agency.  The Jet Propulsion Laboratory, a division of the California Institute of Technology in Pasadena, manages the mission for NASA's Science Mission Directorate, Washington, D.C. The Cassini orbiter and its two onboard cameras were designed, developed and assembled at JPL.  The imaging operations center is based at the Space Science Institute in Boulder, Colo.