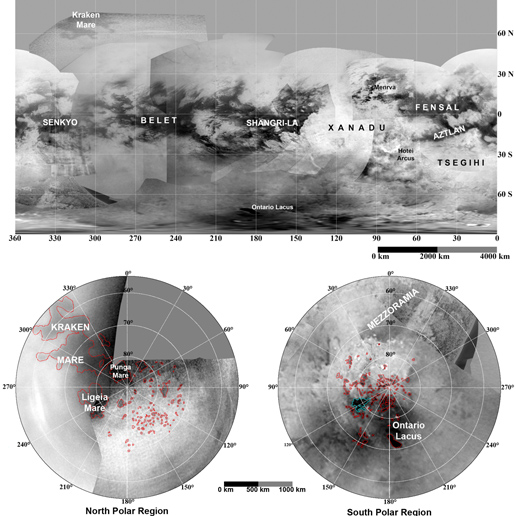 These updated maps of Saturn's moon Titan, consisting of data from the Cassini imaging science subsystem, include Cassini's August 2008 imaging of the moon's northern hemisphere.

Evidence from Cassini's imaging science subsystem, radar, and visual and infrared mapping spectrometer instruments strongly suggests that dark areas near the poles are lakes of liquid hydrocarbons-an analysis affirmed by images capturing those changes in the lakes thought to be brought on by rainfall.

Colored lines in the polar portions of these maps illustrate the boundaries between surface regions having different albedos -- or differences in surface brightness -- which Cassini scientists have interpreted as potential shorelines. Blue outlines indicate features that changed between observations made one year apart (see PIA11147).

The maps are compiled from images dating from April 2004 through August 2008, and their resolutions vary from a few meters to a few tens of kilometers per pixel. Brightness variations are due to differences in surface albedo rather than topographic shading.