Baghdad and Cairo Sulci on Enceladus 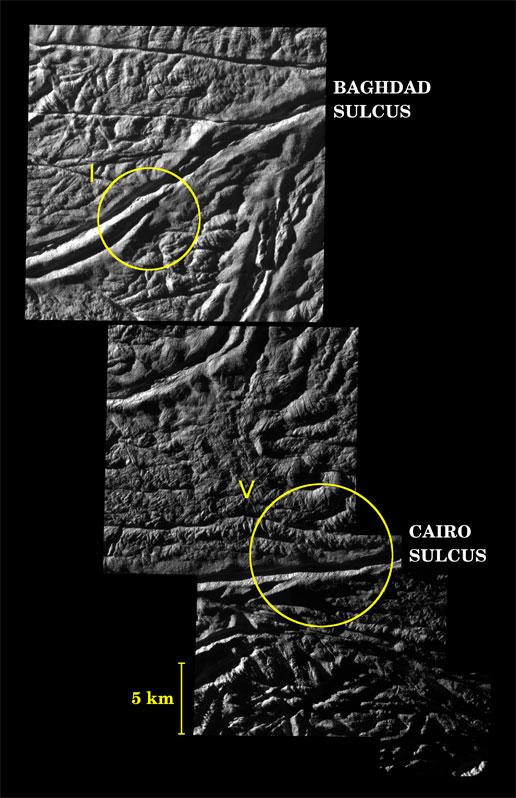 Five of those images are presented in this mosaic; the other two images are shown in PIA11113. Features on Enceladus are named for characters and places from "The Arabian Nights," and the four most prominent sulci are named Alexandria, Cairo, Baghdad and Damascus. Here, Baghdad Sulcus runs across the top mosaic tile, from lower left to upper right. Cairo Sulcus runs from left to right just beneath the center tile.

One highly anticipated result of this flyby was to pinpoint previously identified source locations for the jets that blast icy particles, water vapor and trace organics into space (see PIA08385). The yellow circles on the annotated version of the mosaic indicate source locations I and V identified in PIA08385.

Scientists are using these new images to study geologic activity associated with the sulci, and effects on the surrounding terrain. This information, coupled with observations by Cassini's other instruments, may answer the question of whether reservoirs of liquid water exist beneath the surface.

The mosaic consists of five images taken with the clear spectral filters on Cassini's narrow-angle camera. The view is an orthographic projection with an image scale of 14.5 meters (47.5 feet) per pixel. The area shown here is centered on 81.6 degrees south latitude, 56.5 degrees west longitude. The original images ranged in resolution from 10 to 24 meters (33 to 79 feet) per pixel and were taken at distances ranging from 1,288 to 3,600 kilometers (800 to 2,237 miles) from Enceladus.