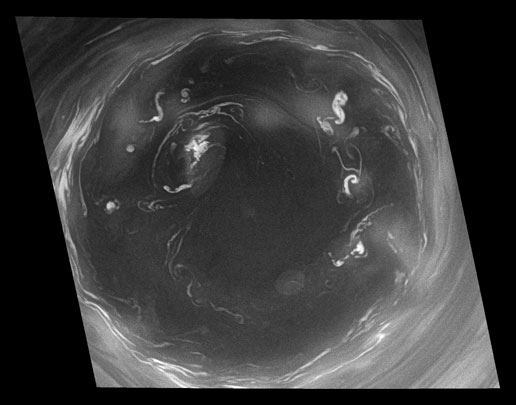 This detailed Cassini view of the monstrous vortex at Saturn's south pole provides valuable insight about the mechanisms that power the planet's atmosphere.

This view is 10 times more detailed than any previous image of the polar vortex. See PIA11103 for a more oblique, wide-angle view that provides context for this close-up.

Previous images revealed an outer ring of high clouds surrounding a region previously thought to be mostly clear air interspersed with a few puffy clouds that circulate around the center. This new image shows that what looked like puffy clouds at lower resolution are actually vigorous convective storms that form yet another distinct, inner ring. In other words, they are deep convective structures seen through the atmospheric haze. One of the deeper structures (at the 10 o'clock position) has punched through to a higher altitude and created its own little vortex. The ring is similar to the eyewall of a terrestrial hurricane, but much larger. The clear air there is warm, like the eye of a terrestrial hurricane, but on Saturn it is locked to the pole, whereas a terrestrial hurricane drifts around.

Convective structures are small regions of intense upwelling air, but the clear air of the vortex eye indicates that this is generally an area of downwelling. Convection is an important part of the planet's energy budget because the warm upwelling air carries heat from the interior. In a terrestrial hurricane, the convection occurs in the eyewall. Here it seems to occur in the eye as well. The camera filter used for this image captures light at wavelengths where atmospheric gases like methane are fairly transparent, allowing for detailed views of deep cloud features. Other filters (see PIA09859) use light that is strongly absorbed by methane gas; the light bounces off the high clouds, making them visible, but gets absorbed before it reaches the low clouds. Such "methane-band" images of the south polar vortex reveal that the convective clouds do not reach up to the base of the stratosphere, as convective clouds on Earth do. This view was acquired from 56 degrees below the ringplane. The image has been digitally reprojected to show the scene as it would appear to an observer positioned directly above the pole.

The image was taken with the Cassini spacecraft narrow-angle camera on July 14, 2008, using a combination of two spectral filters sensitive to wavelengths of polarized visible light centered at 617 and infrared light centered at 750 nanometers. The view was obtained at a distance of approximately 392,000 kilometers (243,000 miles) from Saturn and at a sun-Saturn-spacecraft, or phase, angle of 60 degrees. Image scale is 2 kilometers (1 mile) per pixel.