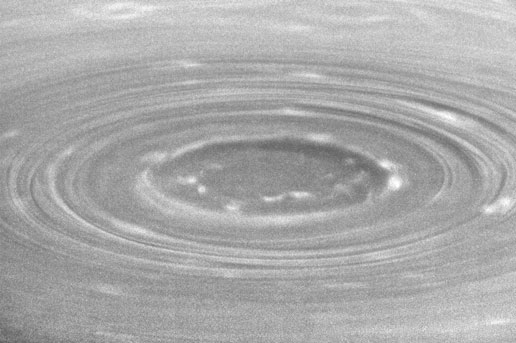 Shadows reveal the topography of Saturn's south polar vortex. At high resolution, a new, inner ring of isolated, bright clouds is seen. These clouds are localized regions of convective upwelling, an important clue to understanding how heat energy is transported in Saturn's atmosphere.

See PIA11104 for a high-resolution Cassini view that looks more directly down onto the vortex, compared to this oblique perspective. Sunlight illuminates the scene from upper right, and the higher altitude rings of clouds surrounding the pole cast shadows toward lower left. North on Saturn is up.

The image was taken with the Cassini spacecraft narrow-angle camera on July 15, 2008, with a combination of spectral filters sensitive to wavelengths of polarized infrared light centered at 746 and 938 nanometers. The grainy quality of the image is due primarily to the low signal-to-noise ratio of images taken with the 938 nanometer spectral filter, which is near the upper limit of the wavelength range the camera can see. "Signal-to-noise" is a term scientists use to refer to the amount of meaningful or useful information (signal) in their data versus the amount of background noise. A higher signal-to-noise ratio yields sharper, clearer views of features in the atmosphere. The view was acquired from 24 degrees below the ringplane, at a distance of approximately 778,000 kilometers (483,000 miles) from Saturn. The sun-Saturn-spacecraft, or phase, angle is about 30 degrees. Image scale is 4 kilometers (3 miles) per pixel.