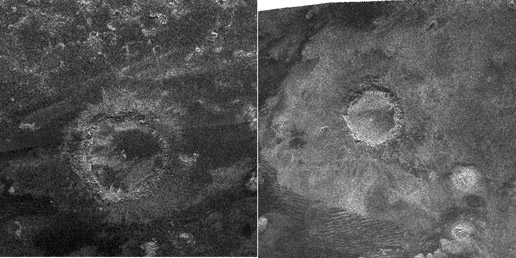 This side-by-side view shows a newly discovered impact crater (at left) compared with a previously discovered crater (at right). The new crater was just discovered by the Cassini spacecraft's radar instrument during its most recent Titan flyby on May 12, 2008. This makes the fourth feature definitely identified as an impact crater so far on Titan -- fewer than 100 features are regarded as possible impacts. Compared with Saturn's other moons, which have many thousands of craters, Titan's surface is very sparsely cratered. This is in part due to Titan's dense atmosphere, which burns up the smaller impacting bodies before they can hit the surface. Geological processes, such as wind-driven motion of sand and icy volcanism, may also wipe out craters.

Both images are about 350 kilometers (217 miles) in width. The crater on the right was discovered by Cassini in 2005 and is shown here for comparison. It is 80 kilometers (50 miles) in diameter (see PIA07368), with the radar illumination from above. Called Sinlap, this crater is estimated to be about 1,300 meters (984 feet) deep. The new feature pictured on the left, which has not been named yet, is bigger than the Sinlap crater with a diameter of about 112 kilometers (70 miles).

The new crater is located at about 26 degrees north latitude, 200 degrees west longitude, in the bright region known as Dilmun, about 1,000 kilometers (600 miles) north of the Huygens landing site. In its image, also illuminated from above, it appears slightly irregular, suggesting that it was modified after it was formed, perhaps by collapses of segments of its rim onto the floor. The crater floor appears flat, and two small bright spots indicate a likely central peak complex. The ejecta blanket (surrounding material) from this crater is less prominent than that of the Sinlap crater. The crater's more degraded character suggests it could be older than Sinlap (assuming that erosive processes are the same at both locations, which are at similar latitudes).

For more information about the Cassini-Huygens mission, visit http://saturn.jpl.nasa.gov/home/index.cfm.