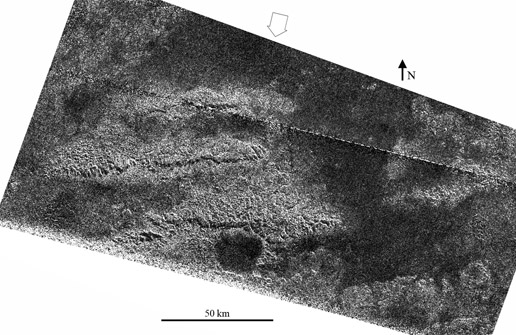 A set of three parallel ridges was seen by the Cassini spacecraft's radar instrument during the latest Titan flyby on May 12, 2008. This combination is unlikely to be a coincidence -- the best explanation for these features is that they are tilted or separated blocks of broken or faulted crust, now exposed as high ridges. Their regular spacing is typical of regions that have been compressed or extended over large areas; as an example, the western United States Basin and Range Province was formed by extension. Such interactions are called tectonics, although they do not happen in the same way as plate tectonics, which is a process unique to Earth.

The ridges, which appear on the left side of the image, are rugged features and are elevated above surrounding terrain. The brightness patterns mean that the materials are fractured or blocky at the radar wavelength (2.17 centimeters, or about 1 inch). Along the south sides of the ridges are prominent cliffs, or scarps, present as thin, radar-dark lines trending west-to-east, and interpreted as faults. These features are dark due to shadowing from the radar illumination, and have heights up to a few hundred meters (several hundred feet), based on preliminary estimates of slopes.

The area shown here is located in the mountainous region called Xanadu. The ridges are similar in many ways to mountain chains seen at similar latitude but about 90 degrees to the west, just west of Shangri-La (observed during a flyby in October 2005, PIA08454). Both regions have mountain chains or ridges that are oriented west-to-east and are spaced about 50 kilometers (30 miles) apart. This indicates tectonic forces have acted in a north to south direction at Titan’s equatorial region and have resulted in regular effects in Titan’s crust, evidence that will help scientists better understand Titan’s crust and interior.

Other linear features, probably related to the formation of the ridges, and circular features, perhaps eroded impact craters now filled with radar-dark (smooth) material, are also seen in the image. The largest circular feature, at bottom center, is about 20 km in diameter.

The image is centered at 2 degrees south, 127 degrees west and was obtained on May 12, 2008, with a resolution of about 300 meters (980 feet). The open arrow indicates the direction of radar illumination. The dashed white line in the upper portion is an artifact of the SAR processing and will be removed in later versions.

For more information about the Cassini-Huygens mission, visit http://saturn.jpl.nasa.gov/home/index.cfm.