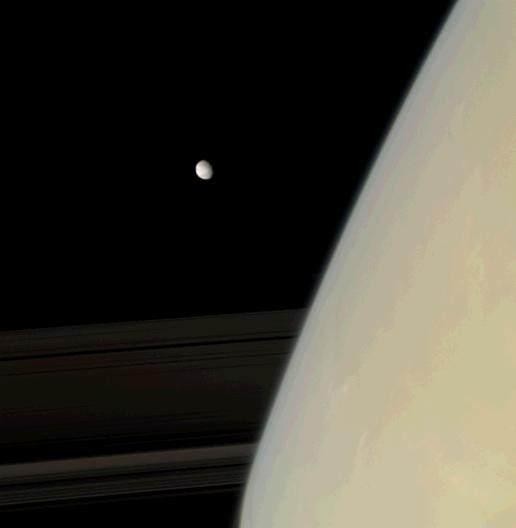 Mimas emerges from behind hazy Saturn. The rings appear distorted near the planet as their image passes through the upper atmosphere.

The limb of Mimas (396 kilometers, or 246 miles across) is slightly flattened on the left side by the rim of the large crater Herschel (see PIA08278).

This view looks toward the unilluminated side of the rings from about 9 degrees above the ringplane.Images taken using red, green and blue spectral filters were combined to create this natural color view. The images were acquired with the Cassini spacecraft narrow-angle camera on Nov. 30, 2007 at a distance of approximately 1.7 million kilometers (1.1 million miles) from Mimas. Image scale is 10 kilometers (6 miles) per pixel on Mimas.