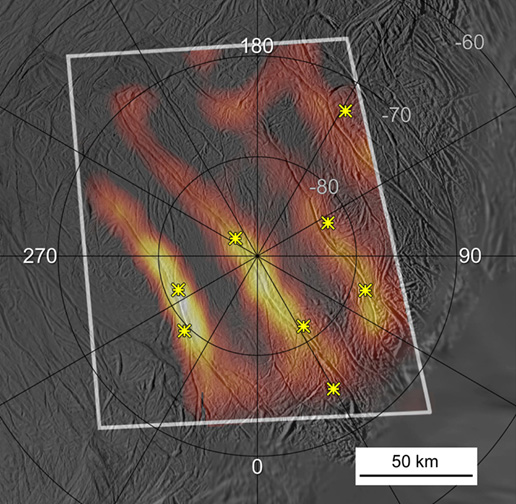 Heat radiating from the entire length of 150 kilometer (95 mile)-long fractures is seen in this best-yet heat map of the active south polar region of Saturn's ice moon Enceladus. The warmest parts of the fractures tend to lie on locations of the plume jets identified in earlier images, shown in the annotated version with yellow stars. The measurements were obtained by the Cassini spacecraft's Composite Infrared Spectrometer from the spacecraft's close flyby of the moon on March 12, 2008.

Heat is escaping from Enceladus' interior along these warm fractures, dubbed "tiger stripes," which are also the source of the geysers that erupt from the polar region. The infrared radiation was mapped at wavelengths between 12 and 16 microns. The infrared data, shown in false color, are superimposed on a grayscale image mosaic of the south pole obtained by Cassini's cameras on July 14, 2005, during the previous close Enceladus flyby. Numbers on the map indicate latitude and longitude.

This new view shows that at least three of the south polar fractures are active along almost their full lengths--the fourth one, on the right, was only partially covered by this scan. The level of activity varies greatly along the fractures. The warmest parts of the fractures tend to lie on locations of the plume jets identified in earlier images. The main "tiger stripe" fractures are not the only sources of heat, however; additional warm spots are seen in the upper right part of the scan. The warm regions are probably concentrated within less than a few hundred meters (a few hundred yards) of the fractures, and their apparent width in this image results from the relatively low resolution of the infrared data.

The Cassini-Huygens mission is a cooperative project of NASA, the European Space Agency and the Italian Space Agency. The Jet Propulsion Laboratory, a division of the California Institute of Technology in Pasadena, manages the mission for NASA's Science Mission Directorate, Washington, D.C. The Cassini orbiter was designed, developed and assembled at JPL. The composite infrared spectrometer team is based at NASA's Goddard Space Flight Center, Greenbelt, Md.