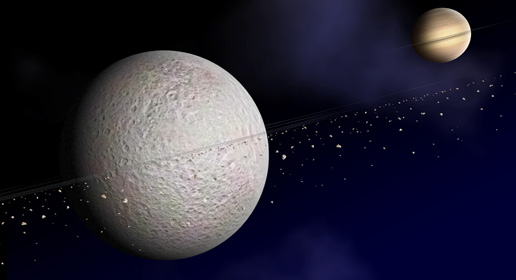 This is an artist concept of the ring of debris that may orbit Saturn's second-largest moon, Rhea. The suggested disk of solid material is exaggerated in density here for clarity.

Due to a decrease in the number of electrons detected by NASA's Cassini spacecraft on either side of the moon, scientists suggest that rings are the likeliest cause of these electrons being blocked before they reach Cassini.

The Cassini-Huygens mission is a cooperative project of NASA, the European Space Agency and the Italian Space Agency. The Jet Propulsion Laboratory, a division of the California Institute of Technology in Pasadena, manages the mission for NASA's Science Mission Directorate, Washington, D.C. The Cassini orbiter was designed, developed and assembled at JPL. The magnetospheric imaging instrument was designed, built and is operated by an international team led by the Applied Physics Laboratory of the Johns Hopkins University, Laurel, Md.

For more information about the Cassini-Huygens mission visit http://saturn.jpl.nasa.gov . and the instrument team's home page, http://sd-www.jhuapl.edu/CASSINI/index.html .