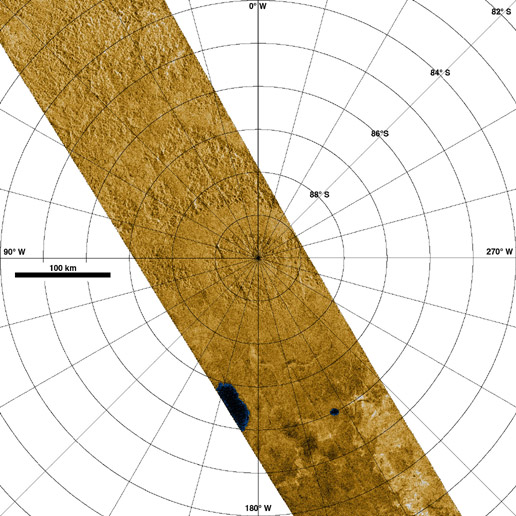 This synthetic aperture radar image was obtained by the Cassini spacecraft on its recent pass by Titan's south pole on Dec. 20, 2007.

This portion of the (T39) swath is of the region extending from about 84 degrees south to the south pole, with a length of approximately 760 kilometers (470 miles) and width of 150 to 170 kilometers (90 to 100 miles). The polar projection of this image is at 128 pixels per degree, or approximately 351 meters per pixel (1,150 feet per pixel), and the radar illumination is from the lower left with incidence angles from about 22 to 38 degrees.

This image covers the south pole of Titan, which can be seen as a region of broad smooth valleys surrounded by rugged terrain. Also seen in this image are two features interpreted as lakes, the larger of which may correspond to dark features first identified by the imaging science subsystem in June 2005 (See See PIA06240). Their very dark appearance in the radar image indicates that they are probably filled with liquid methane. Other apparently empty lake basins are seen elsewhere in the radar swath. Based on this swath, there appear to be fewer lakes near the south pole than seen in a typical region near the north pole (for example, See pia10008). Since Titan is currently in its late summer season in the southern hemisphere, this interpretation is consistent with a previously proposed theory that methane fills the lakes during the winter and evaporates during the summer, leaving them dry until the next fall.

Intensity in this colorized image is proportional to how much radar brightness is returned, or more specifically, the logarithm of the radar backscatter cross-section. The colors are not a representation of what the human eye would see. The lakes, darker than the surrounding terrain, are emphasized here by tinting regions of low backscatter in blue. Radar-brighter regions are shown in tan.