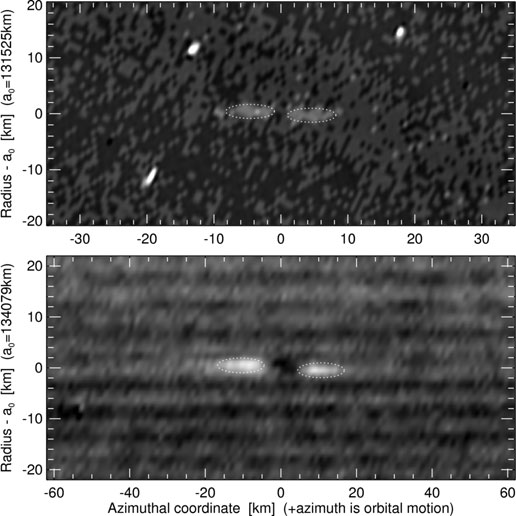 This set of Cassini spacecraft images shows a close-up view of two propeller structures in Saturn's A ring. These images are part of a large view (See PIA10079) that captures eight new propeller-like features in what may be the propeller "hot zone" of Saturn's rings.

Propellers were first discovered in Cassini images taken during Saturn orbit insertion in 2004. Propellers form around small moonlets that are not massive enough to clear out ring material, but are still able to push the ring particles into a shape reminiscent of an airplane propeller.

These pictures show two new propellers close up (one centered on each image). These images were put together from images in the Planetary Data System, a web site which archives and distributes scientific data from NASA planetary missions. The image on the top shows a propeller induced by a 150-meter (490-foot) moonlet (See PIA10079 for a global view; with this close up marked with a red box). Smaller bright spots in the image are artifacts. The image on the bottom shows another propeller located just outside of the Encke Gap. Fine horizontal stripes seen in the image are wakes induced by the moon Pan.