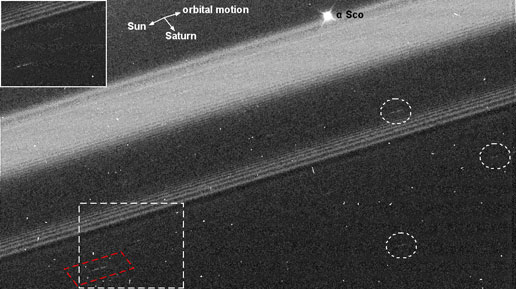 The Cassini spacecraft captures eight new propeller-like features within Saturn's A ring in what may be the propeller "hot zone" of Saturn's rings.

Propeller features form around small moonlets that are not massive enough to clear out ring material, but are still able to pull smaller ring particles into a shape reminiscent of an airplane propeller. Scientists believe that propellers represent moonlet wakes, which are denser than the surrounding ring material and appear bright in the images.

Propellers were first discovered in Cassini images taken during Saturn orbit insertion in 2004. This new image is from a more extensive study of the full A ring and provides evidence that these features are not distributed evenly as previously thought, but are instead grouped in a 3,000 kilometer-wide (1,860 mile) propeller belt.

This image shows four new propellers and was put together from images in the Planetary Data System, a web site which archives and distributes scientific data from NASA planetary missions. The largest propeller seen here is noted in the white dashed box, and it indicates the presence of a 150-meter (490-foot) moonlet. The size is inferred from the radial separation of the propeller wings. The propeller is seen in another image and is shown in the upper left box. The reappearance of the propellers clearly demonstrates the orbital motion of the propellers. The region enclosed in the red box is zoomed and shown in the top panel of PIA10080. Three additional propellers are noted with white dashed circles on the right. Very bright and round spots are artifacts. But some of the bright elongated and non-saturated streaks could be smaller propellers that are not resolved in the image.

This view is made up of two images from a set of 26 images with a complete radial coverage of the A ring and part of the Cassini division taken during an occultation of the star Antares (alpha Scorpii; brightest spot on top) on Aug. 20, 2005.

In this clear filter image, the Cassini spacecraft narrow-angle camera observed the unlit side of the rings, with a phase angle of 126 degrees. The images were taken at 1 minute intervals with 0.05 seconds exposure time. Image resolution is 1 kilometer (0.6 miles) per pixel.