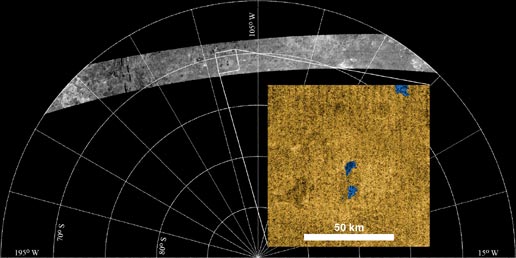 Cassini's radar instrument finds lakes in the southern hemisphere of Titan during the most recent Titan flyby. This is the first confirmation of lakes in the southern hemisphere with the radar instrument. Hundreds of lakes have already been discovered and imaged by radar at Titan's north pole. This finding is important to scientists who are trying to understand how Titan's environment works.

Shown here is a portion of the image swath and an inset with details of a small portion in false color. Titan’s south pole is at the bottom center. The nature and similarities between the northern and southern near-polar regions supports the idea that much of Titan’s poles are climate-driven.

A few small dark patches - liquid-hydrocarbon-filled lakes - stand out, at about 70 degrees south, and are highlighted in the insert (lakes are colored blue). Other features in the scene include broad, steep-sided depressions adjoined to sinuous depressions, interpreted to be empty topographic basins or drained lakes fed by channels, and complex mottled terrain, akin to those at similar northern latitudes. Similarities in features between northern and southern hemispheres imply that the climatic conditions are also similar.