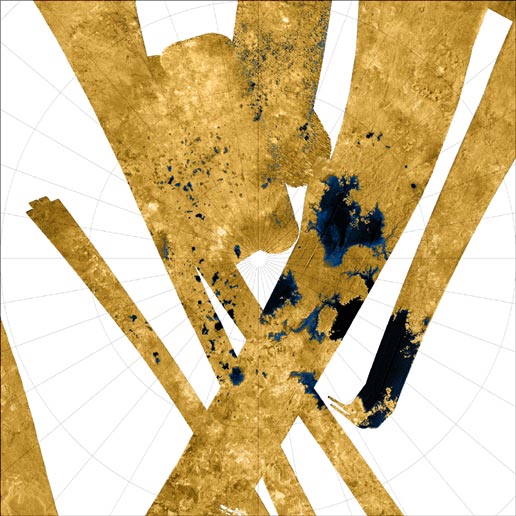 Features appearing darkest to the radar, which are thought to be liquid, are shown in blue and black, and the radar-bright areas likely to be solid surface are tinted brown. The terrain in the top center of this mosaic is imaged at lower resolution than the remainder of the image.

Most of the many lakes and seas seen so far are contained in this image, including the largest known body of liquid on Titan. These seas are most likely filled with liquid ethane, methane and dissolved nitrogen.

Many bays, islands and presumed tributary networks are associated with the seas. The large feature in the upper right center of this image is at least 100,000 square kilometers (40,000 square miles) in area, greater in extent than Lake Superior (82,000 square kilometers or 32,000 square miles), one of Earth's largest lakes. This Titan feature covers a greater fraction of the surface, at least 0.12 percent, than the Black Sea, Earth's largest terrestrial inland sea, at 0.085 percent. Larger seas may exist, as it is probable that some of these bodies are connected, either in areas unmapped by radar or under the surface (See PIA08365).