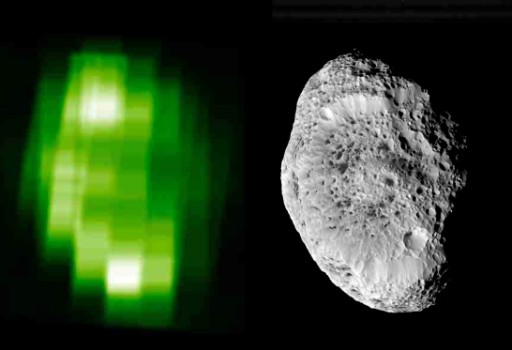 In this ultraviolet image of Hyperion, produced using data taken with Cassini's Ultraviolet Imaging Spectrograph during the September 2005 close flyby, brightness contrasts are due to both topographic and compositional variations across the surface. The brightest regions are exposed water ice in the rim of the crater that dominates the hemisphere in view.

This new ultraviolet map (left) is shown next to a previously released image (right) taken by the Imaging Science Subsystem (see PIA07761).

The Cassini-Huygens mission is a cooperative project of NASA, the European Space Agency and the Italian Space Agency. The Jet Propulsion Laboratory, a division of the California Institute of Technology in Pasadena, manages the mission for NASA's Science Mission Directorate, Washington, D.C. The Cassini orbiter was designed, developed and assembled at JPL. The ultraviolet imaging spectrograph was designed and built at, and the team is based at the University of Colorado, Boulder. The imaging operations center is based at the Space Science Institute in Boulder, Colo.

For more information about the Cassini-Huygens mission, visit: http://saturn.jpl.nasa.gov/home/index.cfm . The ultraviolet imaging spectrograph team home page is at: http://lasp.colorado.edu/cassini . The Cassini imaging team homepage is at http://ciclops.org