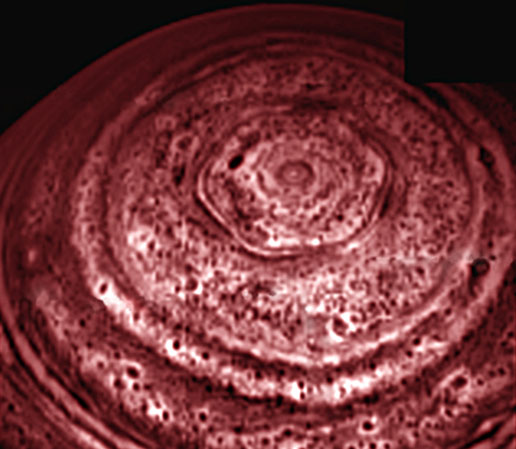 A bizarre six-sided feature encircling the north pole of Saturn near 78 degrees north latitude has been spied by the visual and infrared mapping spectrometer on NASA's Cassini spacecraft. This image is one of the first clear images ever taken of the north polar region as seen from a unique polar perspective.

Originally discovered and last observed by a spacecraft during NASA's Voyager flybys of the early 1980's, the new views of this polar hexagon taken in late 2006 prove that this is an unusually long-lived feature on Saturn.

This image is the first to capture the entire feature and north polar region in one shot, and is also the first polar view using Saturn's thermal glow at 5 microns (seven times the wavelength visible to the human eye) as the light source. This allows the pole to be revealed during the nighttime conditions presently underway during north polar winter. Previous images from Voyager and from ground-based telescopes suffered from poor viewing perspectives, which placed the feature and the north pole at the extreme northern limb (edge) of the planet.

To see the deep atmosphere at night, the infrared instrument images the thermal glow radiating from Saturn's depths. Clouds at depths about 75 kilometers (47 miles) lower than the clouds seen at visible wavelengths block this light, appearing dark in silhouette. To show clouds as features that are bright or white rather than dark, the original image has been contrast reversed to produce the image shown here. The nested set of alternating white and dark hexagons indicates that the hexagonal complex extends deep into the atmosphere, at least down to the 3-Earth-atmosphere pressure level, some 75 kilometers (47 miles) underneath the clouds seen by Voyager. Multiple images acquired over a 12-day period between Oct. 30 and Nov. 11, 2006, show that the feature is nearly stationary, and likely is an unusually strong pole-encircling planetary wave that extends deep into the atmosphere.