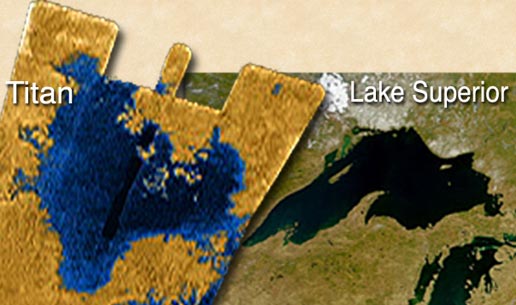 This side-by-side image shows a Cassini radar image (on the left) of what is the largest body of liquid ever found on Titan's north pole, compared to Lake Superior (on the right). This close-up is part of a larger image (see PIA09182) and offers strong evidence for seas on Titan. These seas are most likely liquid methane and ethane.

This feature on Titan is at least 100,000 square kilometers (39,000 square miles), which is greater in extent than Lake Superior (82,000 square kilometers or 32,000 square miles), which is one of Earth’s largest lakes. The feature covers a greater fraction of Titan than the largest terrestrial inland sea, the Black Sea. The Black Sea covers 0.085 percent of the surface of the Earth; this newly observed body on Titan covers at least 0.12 percent of the surface of Titan. Because of its size, scientists are calling it a sea.