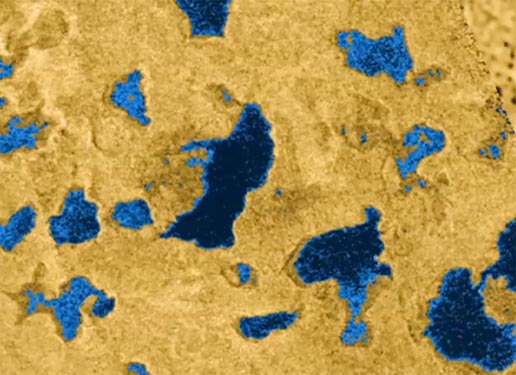 This movie, comprised of several detailed images taken by Cassini's radar instrument, shows bodies of liquid near Titan's north pole. These images show that many of the features commonly associated with lakes on Earth, such as islands, bays, inlets and channels, are also present on this cold Saturnian moon. They offer strong evidence that larger bodies seen in infrared images are, in fact, seas. These seas are most likely liquid methane and ethane.

For more than two decades, scientists have debated whether liquids on Titan exist, and if so, where they would be located. Pre-Cassini observations from the 1980s indicated that something on Titan's surface must be re-supplying the methane to its atmosphere. A global ocean was once hypothesized. Subsequently, disconnected lakes or seas were predicted. The discovery of numerous lakes near Titan's north pole by the Cassini radar instrument in July 2006 has confirmed the latter idea, and indicates an apparent preference during the current season for liquids to be located near the north pole.

These new observations of the north polar area show how extensive and widespread these lakes are, and reveal at least one body of liquid that might rightly be called a sea. These seas cover an area about 100,000 square kilometers (about 39,000 square miles), larger than the largest Great Lake, Lake Superior, near the U.S. and Canadian border, whose area is 82,000 square kilometers (about 32,000 square miles). Analysis of the data indicates that the bodies of liquid may be tens of meters in depth.

The movie begins with an illustration of the relative orbits of Titan and Cassini, both circling Saturn. The spacecraft is seen approaching the planet with a nodding motion as its antenna scans the moon's surface, turning to keep its target in sight. The animation shows all radar swaths, and zooms in for a close look at the many complex shapes the lakes take. Some features that resemble lakes with no liquid may be remnants that have already dried as the northern winter fades into spring. The resolution of the radar data varies from several kilometers to as fine as 300 meters (984 feet). The coverage shown in the video spans from 50 degrees north latitude, almost to the pole, where a small triangular gap in coverage misses the exact pole. The Cassini-Huygens mission is a cooperative project of NASA, the European Space Agency and the Italian Space Agency. The Jet Propulsion Laboratory, a division of the California Institute of Technology in Pasadena, manages the mission for NASA's Science Mission Directorate, Washington, D.C. The Cassini orbiter was designed, developed and assembled at JPL. The radar instrument was built by JPL and the Italian Space Agency, working with team members from the United States and several European countries.