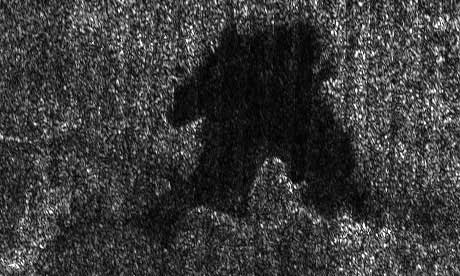 This lake is part of a larger image taken by the Cassini radar instrument during a flyby of Saturn's moon Titan on Sept. 23, 2006. It shows clear shorelines that are reminiscent of terrestrial lakes. With Titan's colder temperatures and hydrocarbon-rich atmosphere, however, the lakes likely contain a combination of methane and ethane, not water.

Centered near 74 degrees north, 65 degrees west longitude, this lake is roughly 20 kilometers by 25 kilometers (12 to 16 miles) across. It features several narrow or angular bays, including a broad peninsula that on Earth would be evidence that the surrounding terrain is higher and confines the liquid. Broader bays, such as the one seen at right, might result when the terrain is gentler, as for example on a beach.

The Cassini-Huygens mission is a cooperative project of NASA, the European Space Agency and the Italian Space Agency. The Jet Propulsion Laboratory, a division of the California Institute of Technology in Pasadena, manages the mission for NASA's Science Mission Directorate, Washington, D.C. The Cassini orbiter and its two onboard cameras were designed, developed and assembled at JPL. The radar instrument team is based at JPL, working with team members from the United States and several European countries.