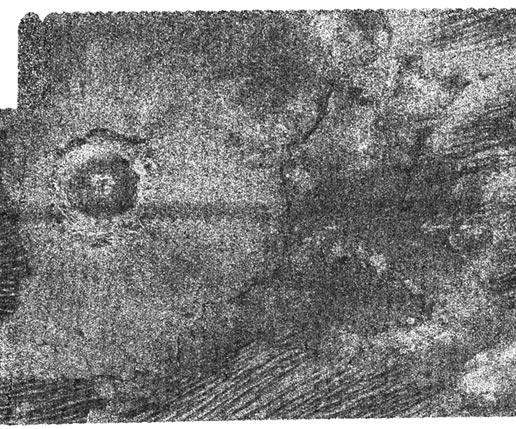 This image from Cassini's radar instrument shows an impact crater with a diameter of 30 kilometers (19 miles) on the surface of Saturn's moon Titan. Cassini data have only revealed three definite impact craters on Titan so far, so each new discovery adds significantly to our body of knowledge. Impact craters are particularly important, as their shapes give scientists insight into the structure of the crust beneath Titan’s surface. The difference in overall appearance between this crater, which has a central peak, and those without, such as Sinlap, (See PIA07368), indicates variations in the conditions of impact, thickness of the crust, or properties of the meteorite that made the crater. The dark floor indicates smooth or highly absorbing materials. This image was acquired by the Cassini radar instrument in synthetic aperture mode during a Sept. 7, 2006, flyby of Titan. The image is centered at 70 degrees west longitude, 10 degrees north latitude, and measures about 150 kilometers high by 190 kilometers wide (93 by 118 miles). The smallest details in this image are about 500 meters (about 550 yards) across.