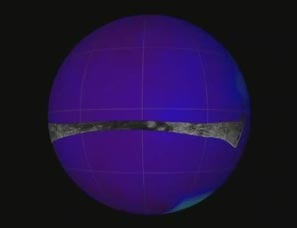 Cassini's powerful radar eyes have uncovered a geologic goldmine in a region called Xanadu on Saturn's moon Titan. Panning west to east, the geologic features include river channels, mountains and hills, a crater and possible lakes.

The movie shows the location mapped with the Cassini Radar Mapper using its Synthetic Aperture Radar imaging mode on April 30, 2006. The global map shows the areas mapped so far by radar. The radar swaths are superimposed on a false-color image made from observations by NASA's Hubble Space Telescope.