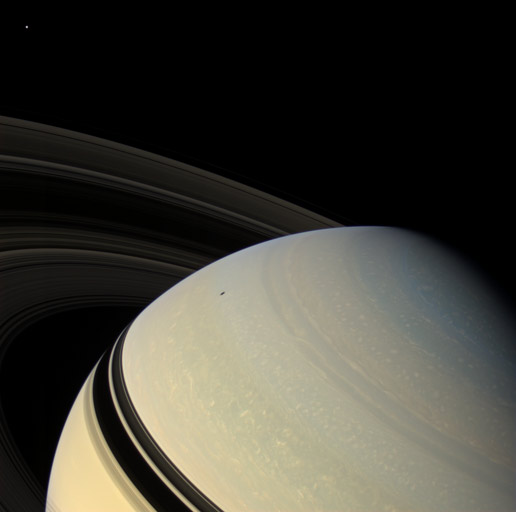 The ringed planet sits in repose, the center of its own macrocosm of many rings and moons and one artificial satellite named Cassini. Mimas (397 kilometers, or 247 miles across) is visible at upper left. Although unseen in this view, Enceladus (504 kilometers, or 313 miles across) casts its shadow upon the planet. The rings also block the sun's light from the low latitudes of the northern hemisphere.

During Cassini's extended mission, dubbed the Cassini Equinox Mission, which begins on July 1, 2008, the ring shadows will slip past the planet's equator and into the southern hemisphere as Saturn passes through its northern vernal equinox on August 11, 2009, and the sun moves northward through the ring plane.

This view looks down on the un-illuminated side of the rings from about 22 degrees above (north of) the ring plane. Images taken using red, green and blue spectral filters were combined to create this natural color view. The images were obtained with the Cassini spacecraft wide-angle camera on Dec. 16, 2007, at a distance of approximately 1.4 million kilometers (900,000 miles) from Saturn. Image scale is 86 kilometers (53 miles) per pixel.

For more information about the Cassini-Huygens mission visit http://saturn.jpl.nasa.gov/ . The Cassini imaging team homepage is at http://ciclops.org .