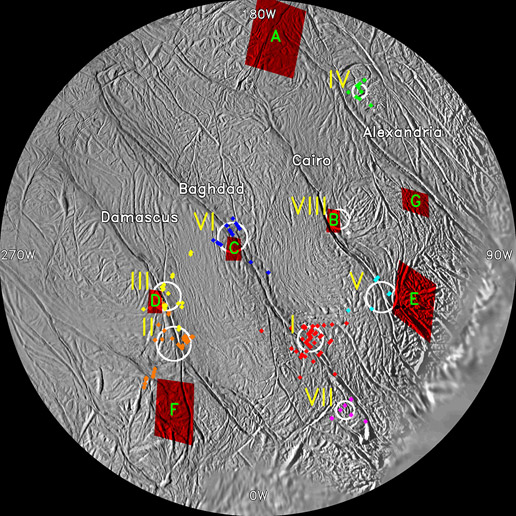 This map of the south polar region of Saturn's moon Enceladus shows the correlation between jet sources identified in Cassini imaging data and hot spots on the surface located by the composite infrared spectrometer instrument.

To identify jet source locations on the surface, imaging scientists carefully measured the locations and orientations of individual jets observed along the moon's limb in Cassini images taken from multiple viewing angles (see PIA08386). For each jet measurement, the researchers then computed a curve, or ground track, on the surface of Enceladus along which that jet might lie. The ground tracks from all of the measurements made in the various images produced many intersections on this map. By considering the jet directions at every possible intersection, the researchers isolated eight clusters of ground track intersections as jet sources.

The eight identified jet source locations are labeled with yellow roman numerals. Composite infrared spectrometer hot spots are red boxes labeled with green capital letters. The line-of-sight intersections indicating the measurements of each source in individual images are shown as colored diamonds. White circles indicate the uncertainty in the locations of those sets of intersections.

The map is a polar stereographic projection of Cassini imaging data. The four tiger stripe fractures, or sulci, are labeled here. The south pole is dead center on the map. Key longitudes are also labeled around the perimeter of the map.

For more information about the Cassini-Huygens mission visit http://saturn.jpl.nasa.gov. The Cassini imaging team homepage is at http://ciclops.org.