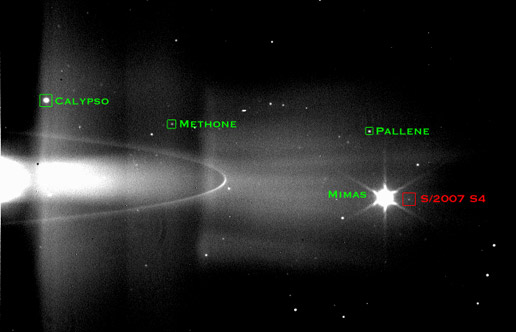 The 60th moon of Saturn reveals itself in a sequence of images. The discovery suggests that the new moon, along with its neighbors Methone and Pallene (discovered by the Cassini imaging team in 2004), may form part of a larger group of moons in this region. The movie spans six hours.

Initial calculations show the moon to have a width of approximately 2 kilometers (1.2 miles), with an orbit that lies between those of the moons Methone and Pallene. The moon's orbit is in resonance with another moon, Mimas, also seen in this sequence as a very bright, moving object. The new moon's location is indicated by a red box.

The (narrow) ring visible in the images is the G ring, and the G ring arc passes through the field of view during the course of the movie. Calypso, a Trojan moon of Tethys, is also visible in the sequence. Trojan moons are found near gravitationally stable points ahead or behind a larger moon.

This view looks toward the non-illuminated side of the rings from about 3 degrees above the ringplane.

The series of images was taken in visible light with the Cassini spacecraft wide-angle camera on May 30, 2007, at a distance of approximately 1.76 million kilometers (1.09 million miles) from Saturn. Image scale is about 105 kilometers (65 miles) per pixel. The ghostly shape that stretches across the scene results from scattered light within the camera optics.