Exploring the Wetlands of Titan 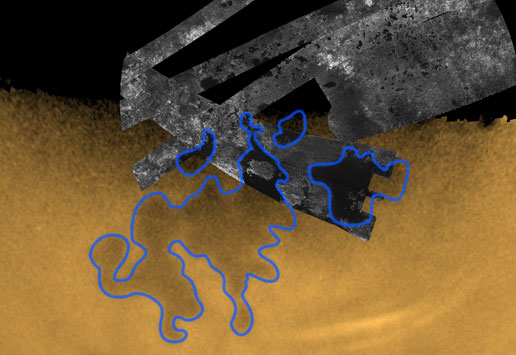 Cassini peers through the murky orange haze of Titan to spy what are believed to be bodies of liquid hydrocarbons, two of them as large as seas on Earth, near the moon's north pole.

This movie blends a near natural-color view and an infrared glimpse of Titan's surface obtained by the visual cameras, followed by a transition to imagery collected by the radar instrument aboard Cassini, for a dramatic reveal of the north pole of Saturn's largest moon.

As the movie zooms in on the north pole, the most readily visible bodies are outlined in blue. The largest of these, on the left, is as big as the Caspian Sea on Earth; the next largest, on the right, is about the size of Lake Superior. When compared to the surface area of Titan however (which is six times smaller than Earth's), these bodies are equivalent in size to the Bay of Bengal and Timor Sea, respectively. Geographically speaking, they are more like seas.

The movie continues with a gradual transition to a polar map of the radar imagery taken so far by Cassini of the north polar region. It is clear that one of the radar swaths has intersected a small upper bay of the largest sea, and has almost entirely imaged the second one.

The extreme darkness of these regions in the radar data argues strongly for the presence of liquid hydrocarbons, such as methane and ethane, which remain liquid at Titan's frigid temperature of minus 180 degrees Celsius (minus 288 degrees Fahrenheit). See PIA09182.

The movie continues with a pan across the pole and the radar imagery that has uncovered a multitude of much smaller lakes.

Features of strikingly similar morphology to these dark northern seas and smaller lakes were first discovered in Cassini Imaging Science Subsystem images in June 2005, at Titan's south pole (see PIA06240). The lake-like shoreline of the largest of these, called Ontario Lacus, its size (about the size of Lake Victoria), and its proximity to the south pole where the largest field of clouds yet seen on Titan had been observed, earned it the reputation as the best candidate for a body of liquid hydrocarbons on Titan up until that point, though the case for liquids was weak. When adjusted for the size of Titan, Ontario Lacus is equivalent in size to the Black Sea. Now, by inference, scientists are more confident that it, and the smaller features that dot the south pole, are also likely open bodies of liquid, and in aggregate make up a southern wetlands on Titan, similar to the one observed in the north polar movie.

The images used to make this movie were taken with the Cassini spacecraft narrow-angle camera on Feb. 25, 2007, at a distance of approximately 1.3 million kilometers (800,000 miles) from Titan. The infrared images were taken with a special filter centered at 938 nanometers that provides the cameras' best view of Titan's surface features. This view was then composited with images taken at 619, 568 and 440 nanometers to create a near natural color appearance. The radar data were acquired in synthetic aperture radar mode. The Cassini-Huygens mission is a cooperative project of NASA, the European Space Agency and the Italian Space Agency. The Jet Propulsion Laboratory, a division of the California Institute of Technology in Pasadena, manages the mission for NASA's Science Mission Directorate, Washington, D.C. The Cassini orbiter and its two onboard cameras were designed, developed and assembled at JPL. The imaging operations center is based at the Space Science Institute in Boulder, Colo.