The Lore of Saturn 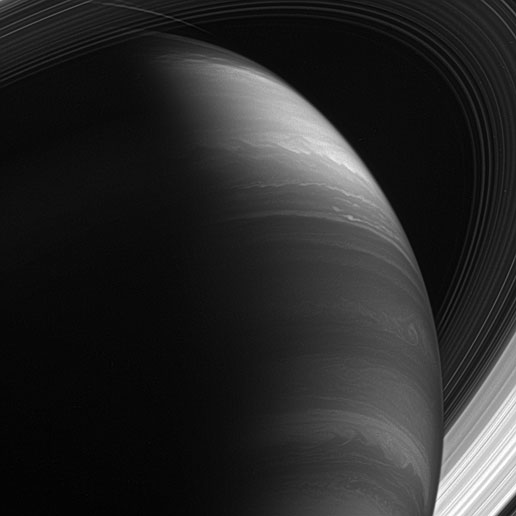 The great planet Saturn reveals mysteries more profound, and stories more grand, than those occasioned by its ancient mythological namesake.

The giant planet is a moody world whose disposition appears to change with the view. Its atmosphere rages with thunderous and hurricane-like storms. Its majestic rings spin a tale of ancient collisions and cataclysm. And its moons may hold secrets to the origins of life.

This view looks toward the lit side of the rings from about 28 degrees below the ring plane.

The image was taken using a spectral filter sensitive to wavelengths of infrared light centered at 890 nanometers. The view was acquired with the Cassini spacecraft wide-angle camera on Jan. 30, 2007, at a distance of approximately 1.1 million kilometers (700,000 miles) from Saturn. Image scale is 60 kilometers (38 miles) per pixel.