The Hole at the Pole 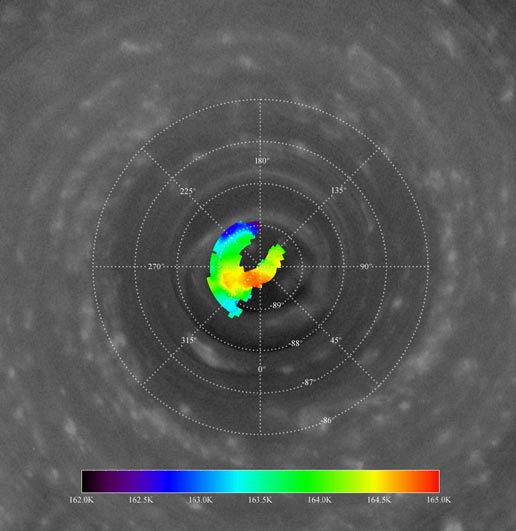 The Cassini data presented in this view appear to confirm a region of warm atmospheric descent into the eye of a hurricane-like storm locked to Saturn's south pole. The view shows temperature data from the Cassini spacecraft composite infrared spectrometer overlaid onto an image from the imaging science subsystem wide-angle camera.

The composite infrared spectrometer data refer to a depth in Saturn's upper stratosphere where the pressure is 0.5 millibars (324 kilometers above the 1-bar level), a region higher than that imaged by the imaging camera and visual and infrared spectrometer during the same observation period. The composite infrared spectrometer data show a very small hot spot over the pole, similar in size to the "eye" of the storm seen in the imaging science subsystem images. See also http://www.nasa.gov/mission_pages/cassini/multimedia/pia08332.html and http://www.nasa.gov/mission_pages/cassini/multimedia/pia08333.html for related images.

Infrared images taken through the Keck I telescope by ground-based observers had previously shown the south polar spot to be warm. Cassini's composite infrared spectrometer has confirmed this with higher resolution temperature maps of the area (like the map displayed here) and sees a temperature increase of about 2 Kelvin (4 degrees Fahrenheit) at the pole.

The temperatures are in the stratosphere and higher up than the clouds seen by the Cassini imaging and visual and infrared mapping spectrometer instruments, but they suggest that the atmosphere sinks over the south pole. Because the pressure increases with depth, the descending atmosphere compresses and heats up. The warmer temperatures over the south pole also indicate that the vortex winds are decaying with height in the stratosphere.

The descent implied by the temperatures nicely supports the lower cloud altitudes observed by the imaging camera and visual and infrared spectrometer instruments at the pole.

The image and atmospheric data were acquired on Oct. 11, 2006, when Cassini was approximately 340,000 kilometers (210,000 miles) from Saturn. The wide-angle camera image was taken using a spectral filter sensitive to wavelengths of infrared light centered at 752 nanometers. The image has been contrast enhanced using digital image processing techniques. The unprocessed image shows an oblique view toward the pole, and was reprojected to show the planet from a perspective directly over the south pole. Scale in the original image was about 17 kilometers (11 miles) per pixel.

The Cassini-Huygens mission is a cooperative project of NASA, the European Space Agency and the Italian Space Agency. The Jet Propulsion Laboratory, a division of the California Institute of Technology in Pasadena, manages the mission for NASA's Science Mission Directorate, Washington, D.C. The Cassini orbiter and its two onboard cameras were designed, developed and assembled at JPL. The imaging operations center is based at the Space Science Institute in Boulder, Colo. The composite infrared spectrometer team is based at NASA's Goddard Space Flight Center, Greenbelt, Md.