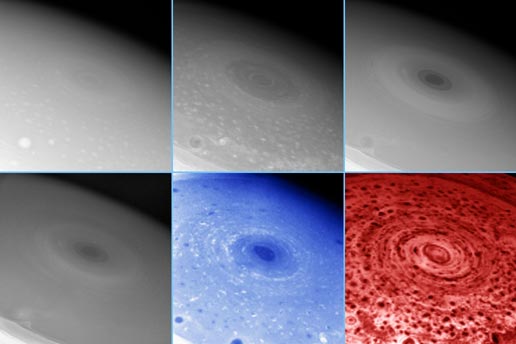 These images of Saturn's south pole, taken by two different instruments on Cassini, show the hurricane-like storm swirling there and features in the clouds at various depths surrounding the pole. Different wavelengths reveal the height of the clouds, which span tens of kilometers in altitude.

The four monochrome images displayed here were acquired by the imaging science subsystem; the blue and red images in the bottom row were taken by the visual and infrared mapping spectrometer.

At the center of the cauldron of storms spinning around the south pole is the south pole itself, which literally appears to be the eye of this vast polar storm system. As in a hurricane on Earth, the south polar "eye" is relatively clear of clouds and is surrounded by a wall of towering clouds that cast shadows into the center. However, while morphologically similar, it is not clear if this vortex operates in the same fashion as a terrestrial hurricane.

In most of the images, the center of the polar storm is quite dark, indicating an unusually cloud-free atmosphere in the upper skies, which are otherwise typically inhabited by bright ammonia clouds. This polar hole in the ammonia cloud layer represents the eye of the hurricane-like storm. Unusually dark clouds likely exist at the bottom of this deep hole, enhancing the murkiness there.

The first image in this montage (at upper left) shows a muted eye, due to the enhanced scattering of light from the atmosphere itself at this blue wavelength (460 nanometers), just as in the blue skies of Earth. In the last image at bottom right, the eye appears relatively bright. This image is taken at a wavelength of 5,000 nanometers, where the dominant source of light is the thermal glow of the planet itself. The bright thermal glow seen in this polar hole again shows that the eye is relatively cloud-free to unusual depths.

In the imaging science subsystem images, the eye looks dark at wavelengths where methane gas absorbs the light (728 nanometers and 890 nanometers, at upper right and lower left) and only the highest clouds are visible, confirming that the clouds within the eye are deeper than their surroundings. This effect is also seen in visual and infrared mapping spectrometer images that show gas absorption.

In the visual and infrared mapping spectrometer image taken at 2,800 nanometers, four times the wavelength of light visible to the human eye, this cloud clearing appears dark, which is consistent with the idea that the atmosphere above any distinct clouds is unusually deep there. The eye is some 1,500 kilometers (930 miles) across, and is surrounded by a distinct ring of clouds some 300 kilometers (185 miles) across.

The images also indicate the prevalence of smaller but vertically well-developed storms across the entire south polar region, indicating the extent to which convection characterizes the area.

Literally hundreds of storm clouds encircle the pole, appearing as dark spots in the infrared spectrometer thermal image (red image) and as both bright and dark spots in images taken in sunlight (blue image). Each of these spots represents a storm. These pictures reveal that Saturn's south pole is a cauldron of storm activity, unlike anything ever seen on any planet.

The individual storms surrounding the pole are seen as dark "leopard spots" in the thermal image (red) taken at a wavelength of 5,000 nanometers, some seven times the wavelength of light visible to the human eye. Here, these spots are blocking the thermal light, or heat, from the interior of Saturn. The storm clouds are thus seen in silhouette against Saturn's thermal glow. The effectiveness of these clouds in blocking Saturn's interior thermal glow indicates that the storm clouds are unusually thick, extending deep down into Saturn's atmosphere, and are comprised of relatively large cloud particles, likely condensates formed in upwelling air currents.

The large number of dark, circular leopard spots at the south pole seen at 5,000 nanometer wavelength, and their correlation with the features seen in sunlight at 2,800 nanometer wavelength, indicates that convective activity extending over dozens of kilometers in altitude is surprisingly rampant in the south polar region. Why such unusual dynamics exist there is perhaps linked to Saturn's southern summer, which is the season Saturn is in now. Observations taken over the next few years, as the south pole season changes from summer to fall, will help scientists understand the role seasons play in driving the dramatic meteorology at the south pole of Saturn.

The Cassini-Huygens mission is a cooperative project of NASA, the European Space Agency and the Italian Space Agency. The Jet Propulsion Laboratory, a division of the California Institute of Technology in Pasadena, manages the mission for NASA's Science Mission Directorate, Washington, D.C. The Cassini orbiter and its two onboard cameras were designed, developed and assembled at JPL. The imaging operations center is based at the Space Science Institute in Boulder, Colo. The visual and infrared mapping spectrometer team is based at the University of Arizona where this image was produced.