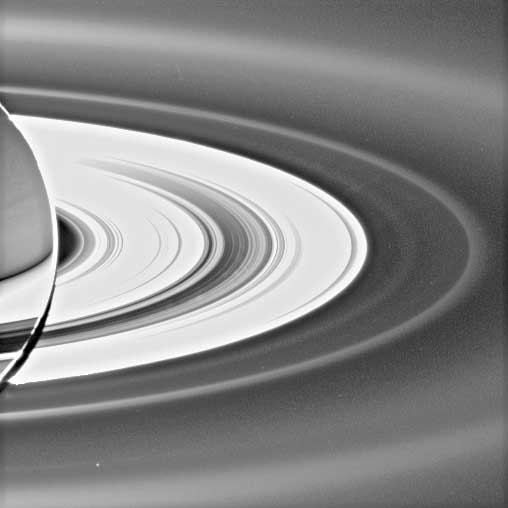 This view, acquired with the sun almost directly behind Saturn, reveals a previously unknown faint ring of material coincident with the orbit of the small moon Pallene.

Another new, diffuse ring seen here was previously announced (see http://www.nasa.gov/mission_pages/cassini/multimedia/pia08322.html), and is coincident with the orbits of Saturn's moons Janus and Epimetheus.

The new Pallene ring is a faint narrow band, about 2,500 kilometers (about 1,550 miles) across, between the E ring and the G ring. The Janus/Epimetheus ring is visible between the G ring and the bright main rings and is about 5,000 kilometer (3,100 miles) wide. A labeled version of this view is also available and shows the locations of these features. 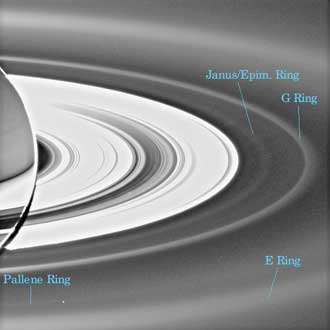 Pallene, discovered by Cassini's imaging cameras earlier in the mission, is 4 kilometers (2.5 miles) across. Pallene orbits Saturn between the moons Mimas and Enceladus. The bright dot in the Pallene ring is not the tiny moon, but rather is a background star. While it is not unexpected that impact events on Janus, Epimetheus, and Pallene might kick particles off the moons' surfaces and inject them into Saturn orbit, it is, however, surprising that these structures are so well-defined.

The view looks down from about 15 degrees above the dark side of the rings. Some faint spokes can also be spotted in the main rings, made visible by sunlight diffusing through the B ring.

The image was taken in visible light with the Cassini spacecraft wide-angle camera on Sept. 15, 2006, at a distance of approximately 2.2 million kilometers (1.3 million miles) from Saturn and at a Sun-Saturn-spacecraft angle of almost 179 degrees. Image scale is approximately 250 kilometers (155 miles) per pixel.

For more information about the Cassini-Huygens mission visit http://saturn.jpl.nasa.gov . The Cassini imaging team homepage is at http://ciclops.org.