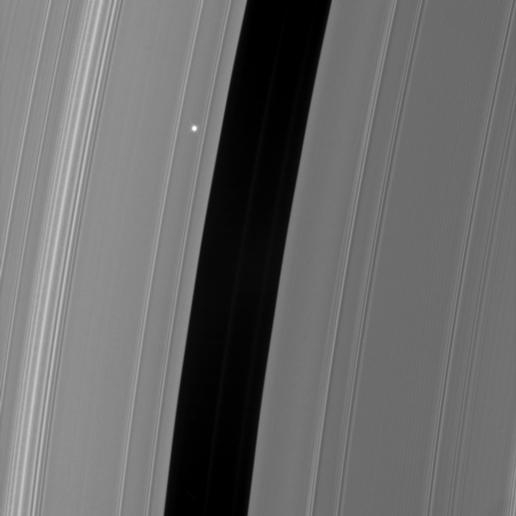 The Cassini spacecraft took a series of images on Sept. 9, 2006 as it watched the bright red giant star Aldebaran slip behind Saturn's rings. This type of observation is known as a stellar occultation and uses a star whose brightness is well known. As Cassini watches the rings pass in front of the star, the star's light fluctuates, providing information about the concentrations of ring particles within the various radial features in the rings.

This view shows the Encke Gap (325 kilometers, or 200 miles wide) and the faint ringlets which share the gap with the embedded moon Pan. The view looks toward the sunlit side of the rings from about 19 degrees below the ringplane. Bright Aldebaran is overexposed, creating thin vertical lines on its image.

The image was taken in visible light with the Cassini spacecraft narrow-angle camera on Sept. 9, 2006 at a distance of approximately 359,000 kilometers (233,000 miles) from Saturn. Image scale on the sky at the distance of Saturn is 2 kilometers (1 mile) per pixel.