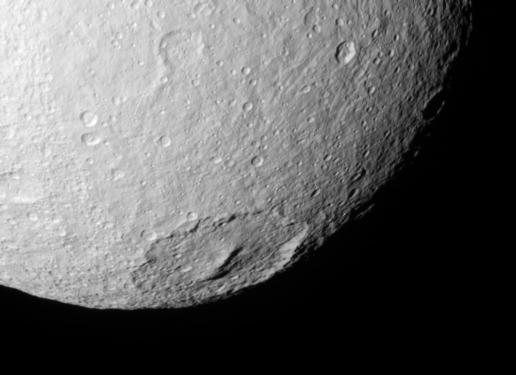 Cassini looks into the 245-kilometer (150-mile) wide crater Melanthius in this view of the southern terrain on Tethys. The crater possesses a prominent cluster of peaks in its center which are relics of its formation.

Notable here is a distinct boundary in crater abundance -- the cratering density is much higher in the farthest western terrain (left side of the image) than elsewhere.

The image was taken in visible light with the Cassini spacecraft narrow-angle camera on July 23, 2006 at a distance of approximately 120,000 kilometers (75,000 miles) from Tethys and at a Sun-Tethys-spacecraft, or phase, angle of 29 degrees. Image scale is 715 meters (2,345 feet) per pixel.