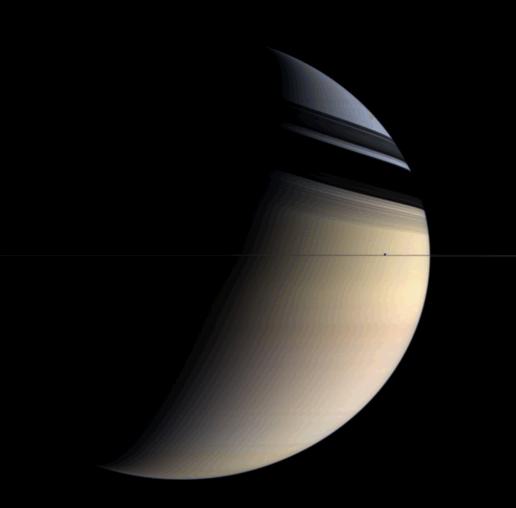 Dreamy colors ranging from pale rose to butterscotch to sapphire give this utterly inhospitable gas planet a romantic appeal. Shadows of the rings caress the northern latitudes whose blue color is presumed to be a seasonal effect.

Enceladus (505 kilometers, or 314 miles across) hugs the ringplane right of center.

Images taken using red, green and blue spectral filters were combined to create this color view, which approximates what the human eye would see. The image was taken with the Cassini spacecraft wide-angle camera on March 16, 2006 at a distance of approximately 2.1 million kilometers (1.3 million miles) from Saturn and at a Sun-Saturn-spacecraft, or phase, angle of 102 degrees. Image scale is 120 kilometers (75 miles) per pixel on Saturn.