From Dark to Bright and Red to White 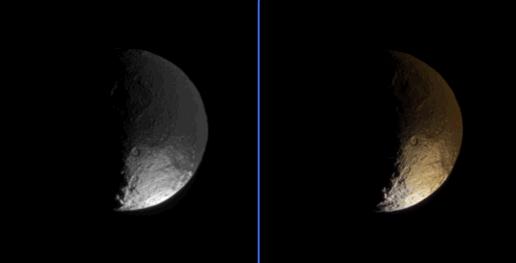 Cassini's landmark investigation of Saturn's yin-yang moon Iapetus, with its bright and dark hemispheres, continues to provide insights into the nature of this intriguing body.

These two views of Iapetus primarily show terrain in the southern part of the moon's dark leading hemisphere -- the side of Iapetus that is coated with dark material. The bright south pole of Iapetus is visible, along with some terrain (at the bottom) that lies on the bright trailing hemisphere.

The dark terrain known as Cassini Regio is uniformly dark between the equator and about 30 degrees south latitude. From there down to about 50 to 60 degrees south latitude, the dark material looks "patchy" because south-facing crater walls are bright (being largely devoid of the dark material). South of this region, only some northward-facing crater walls are still dark, while the bright terrain has a somewhat reddish color.

See PIA06167 for an up-close view of this transition in the northern hemisphere.

Beyond 90 degrees south (i.e., on the trailing side), the reddish color becomes white. The region at the bottom of the color view presented here shows this “color boundary” in the bright terrain, which also marks the boundary between the leading and trailing hemispheres.

Iapetus is 1,468 kilometers (912 miles) across. North is up in the monochrome image and rotated 16 degrees to the left in the color image.

The monochrome image on the left was taken using a filter sensitive to wavelengths of infrared light centered at 930 nanometers. The image was obtained with the Cassini spacecraft narrow-angle camera on April 8, 2006, at a distance of approximately 866,000 kilometers (538,000 miles) from Iapetus and at a Sun-Iapetus-spacecraft, or phase, angle of 88 degrees. The image scale is 5 kilometers (3 miles) per pixel.

The color view on the right was created by combining images taken in ultraviolet, green and infrared spectral filters. The images were acquired with the Cassini spacecraft narrow-angle camera on April 9, 2006, at a distance of approximately 692,000 kilometers (430,000 miles) from Iapetus and at a Sun-Iapetus-spacecraft, or phase, angle of 101 degrees. The image scale is 4 kilometers (2.5 miles) per pixel.