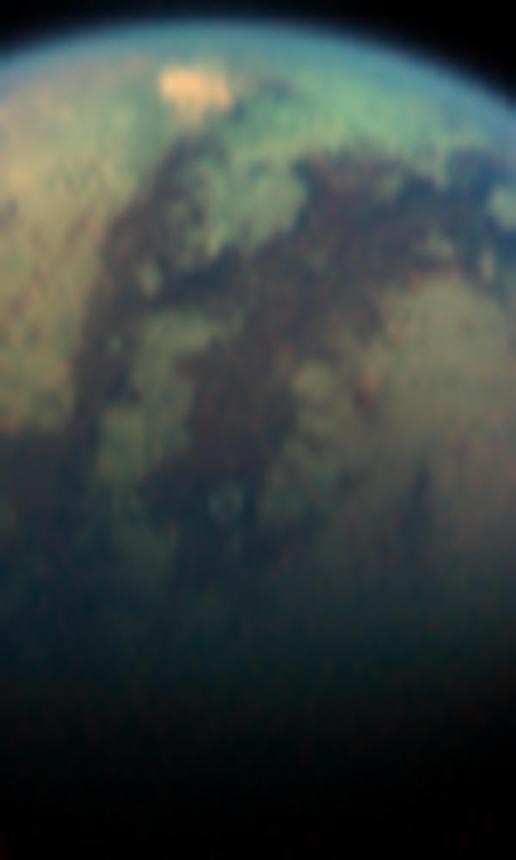 The visual and infrared mapping spectrometer instrument onboard Cassini has found an unusual bright, red spot on Titan.

This dramatic color (but not true color) image was taken during the April 16, 2005, encounter with Titan. North is to the right. In the center it shows the dark lanes of the "H"-shaped feature (see http://www.nasa.gov/mission_pages/cassini/multimedia/pia06407.html) discovered from Earth and first seen by Cassini last July shortly after it arrived in the Saturn system. At the southwestern edge of the "H" feature, near Titan's limb (edge), is an area roughly 500 kilometers (300 miles) across. That area is 50 percent brighter, when viewed using light with a wavelength of 5 microns, than the bright continent-sized area known as Xanadu (see http://www.nasa.gov/mission_pages/cassini/multimedia/pia06107.html).

Xanadu extends to the northwest of the bright spot, beyond the limb (edge) of Titan in this image. Near the terminator (the line between day and night) at the bottom of this image is the 80 kilometer (50 mile) crater that has been previously seen by the Cassini radar, imaging cameras, and the visual and infrared spectrometer (see http://www.nasa.gov/mission_pages/cassini/multimedia/pia07868.html).

At wavelengths shorter than 5 microns, the spot is not unusually bright. The strange spectral character of this enigmatic feature has left the team with four possibilities for its source: the spot could be a surface coloration, a mountain range, a cloud, or a hot spot.

The hot spot hypothesis will be tested during a Titan flyby on July 2, 2006, when the visual and infrared spectrometer will take nighttime images of this area. If it is hot, it will glow at night.

This color image was created from separate images in the 1.7 micron (blue), 2.0 micron (green), and 5.0 micron (red) spectral windows through which it is possible to see Titan's surface. The yellow that humans see has a wavelength of about 0.5 microns, so the colors shown are between 3 and 10 times more red than the human eye can detect.

The Cassini-Huygens mission is a cooperative project of NASA, the European Space Agency and the Italian Space Agency. The Jet Propulsion Laboratory, a division of the California Institute of Technology in Pasadena, manages the mission for NASA's Science Mission Directorate, Washington, D.C. The Cassini orbiter and its two onboard cameras were designed, developed and assembled at JPL. The visual and infrared mapping spectrometer team is based at the University of Arizona.

For more information about the Cassini-Huygens mission visit http://saturn.jpl.nasa.gov. For additional information on the visual and infrared mapping spectrometer visit http://wwwvims.lpl.arizona.edu.