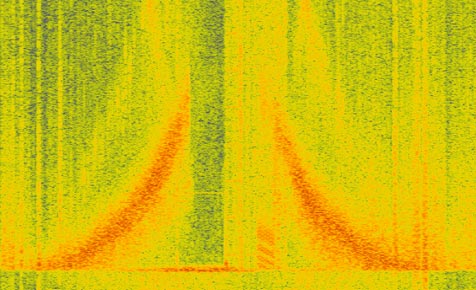 + Audio based on data collected from Cassini's magnetometer at Enceladus

Cassini's magnetometer instrument detected an atmosphere around Enceladus during the Feb. 17, 2005, flyby and again during a March 9, 2005, flyby. This audio file is based on the data collected from that instrument.

Ion cyclotron waves are organized fluctuations in the magnetic field that provide information on what ions are present. Cassini's magnetometer detected the presence of these waves in the vicinity of Saturn's moon Enceladus. This audio file shows the power of these waves near Enceladus.

The Cassini-Huygens mission is a cooperative project of NASA, the European Space Agency and the Italian Space Agency. The Jet Propulsion Laboratory, a division of the California Institute of Technology in Pasadena, manages the mission for NASA's Science Mission Directorate, Washington, D.C. The Cassini orbiter and its two onboard cameras were designed, developed and assembled at JPL. The magnetometer team is based at Imperial College in London, working with team members from the United States and Germany.

For more information about the Cassini-Huygens mission visit http://saturn.jpl.nasa.gov. The magnetometer team homepage is http://www.imperial.ac.uk/research/spat/research/cassini/.