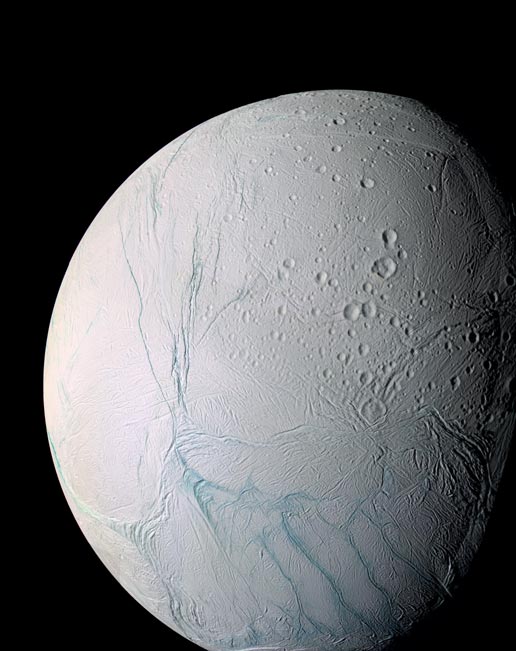 A masterpiece of deep time and wrenching gravity, the tortured surface of Saturn’s moon Enceladus and its fascinating ongoing geologic activity tell the story of the ancient and present struggles of one tiny world. This is a story that is recounted by imaging scientists in a paper published in the journal Science on March 10, 2006.

The enhanced color view of Enceladus seen here is largely of the southern hemisphere and includes the south polar terrain at the bottom of the image.

Ancient craters remain somewhat pristine in some locales, but have clearly relaxed in others. Northward-trending fractures, likely caused by a change in the moon's rate of rotation and the consequent flattening of the moon's shape, rip across the southern hemisphere. The south polar terrain is marked by a striking set of `blue' fractures and encircled by a conspicuous and continuous chain of folds and ridges, testament to the forces within Enceladus that have yet to be silenced.

The mosaic was created from 21 false-color frames taken during the Cassini spacecraft’s close approaches to Enceladus on March 9 and July 14, 2005. Images taken using filters sensitive to ultraviolet, visible and infrared light (spanning wavelengths from 338 to 930 nanometers) were combined to create the individual frames.

The mosaic is an orthographic projection centered at 46.8 degrees south latitude, 188 degrees west longitude, and has an image scale of 67 meters (220 feet) per pixel. The original images ranged in resolution from 67 meters per pixel to 350 meters (1,150 feet) per pixel and were taken at distances ranging from 11,100 to 61,300 kilometers (6,900 to miles) from Enceladus.