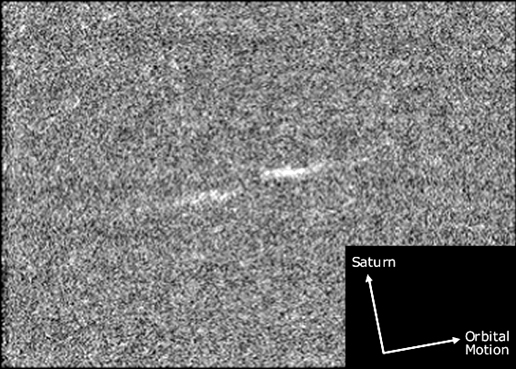 This magnified view illustrates the general orientation of the "propeller" features in Saturn's rings as they orbit the planet. The propellers are features detected in Cassini images that reveal the gravitational influence of moonlets approximately 100 meters (300 feet) in diameter.

The view is from one of the two Saturn orbit insertion images, taken on July 1, 2004, in which the propellers were discovered. The two dashes of the propeller are oriented in the direction of orbital motion. The "leading" dash is also slightly closer to Saturn; this "radial offset" is about 300 meters (1000 feet). The unseen moonlet lies in the center of the structure.

The grainy appearance of the image is due to magnification and the fact that the propellers are very faint--just visible above the level of background noise. Consequently, the image enhancement procedures used have also enhanced the noise.

This propeller image is identified as "feature 1" in PIA07790. The original Cassini spacecraft narrow-angle camera image has been magnified from its original scale for presentation.