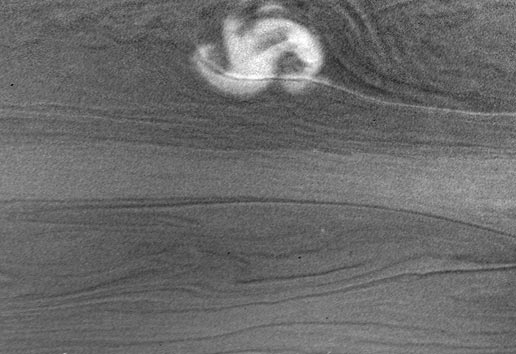 This image shows a rare and powerful storm on the night side of Saturn.

Light from Saturn's rings (called "ringshine") provided the illumination, allowing the storm and other cloud features to be seen. The storm is a possible source of radio emissions believed to come from electrical discharges (lightning) deep in Saturn's atmosphere. Cassini began detecting the radio emissions, which are like those from lightning, on January 23. At about the same time, amateur astronomers reported that a storm had appeared in Saturn's southern hemisphere at minus 35 degrees latitude. Cassini was in the wrong place to take good images of the storm on the day side, since the planet showed only a thin crescent to the spacecraft, but night side imaging was possible using light from the rings.

The image shows the storm as it appeared to the Cassini imaging system on January 27, 2006. The storm’s north-south dimension is about 3,500 kilometers (2,175 miles); it is located at minus 36 degrees (planetocentric) latitude and 168 degrees west longitude. This places it on the side of the planet that faces the spacecraft when the radio emissions are detected; the radio emissions shut down for half a Saturnian day when the storm is on the other side.

This view was derived from an original Cassini image by reprojecting it as a cylindrical map and enhancing the contrast to bring out faint features. See PIA07788 for the original image.

No lightning flashes are visible in the image. They would look like medium-sized bright spots, since the light would spread out before it reaches the cloud tops. Non-detection does not mean that the lightning is absent, however. Lightning might be too faint to stand out above background or too deep to be seen through the thick clouds. Bad luck is another possibility: The camera might have missed the strong flashes during the 10 seconds that the shutter was open.

A narrow-cloud band crosses the storm from left to right. It is illuminated by the rings from the north and is brighter on that side. Cassini scientists are looking forward to an extensive night side image set, designed to look for lightning. That set will be collected during the first half of this year.

The view was obtained in visible light with the Cassini spacecraft narrow-angle camera at a distance of approximately 3.5 million kilometers (2.2 million miles) from Saturn. The image scale in the original image was 20 kilometers (12 miles) per pixel. The Cassini-Huygens mission is a cooperative project of NASA, the European Space Agency and the Italian Space Agency. The Jet Propulsion Laboratory, a division of the California Institute of Technology in Pasadena, manages the mission for NASA's Science Mission Directorate, Washington, D.C. The Cassini orbiter and its two onboard cameras were designed, developed and assembled at JPL. The imaging operations center is based at the Space Science Institute in Boulder, Colo.