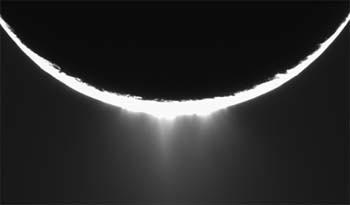 + View this video Jets of icy particles burst from Saturn's moon Enceladus in this brief movie sequence of four images taken on Nov. 27, 2005. The sensational discovery of active eruptions on a third outer solar system body (Io and Triton are the others) is surely one of the great highlights of the Cassini mission.

Imaging scientists, as reported in the journal Science on March 10, 2006, believe that the jets are geysers erupting from pressurized subsurface reservoirs of liquid water above 273 degrees Kelvin (0 degrees Celsius).

Images taken in January 2005 appeared to show the plume emanating from the fractured south polar region of Enceladus, but the visible plume was only slightly brighter than the background noise in the image, because the lighting geometry was not suitable to reveal the true details of the feature. This potential sighting, in addition to the detection of the icy particles in the plume by other Cassini instruments, prompted imaging scientists to target Enceladus again with exposures designed to confirm the validity of the earlier plume sighting.

The new views show individual jets, or plume sources, that contribute to the plume with much greater visibility than the earlier images. The full plume towers over the 505-kilometer-wide (314-mile) moon and is at least as tall as the moon's diameter.

The four 10-second exposures were taken over the course of about 36 minutes at approximately 12 minute intervals.

Enceladus rotates about 7.5 degrees in longitude over the course of the frames, and most of the observed changes in the appearances of the jets is likely attributable to changes in the viewing geometry. However, some of the changes may be due to actual variation in the flow from the jets on a time scale of tens of minutes.

Additionally, the shift of the sources seen here should provide information about their location in front of and behind the visible limb (edge) of Enceladus.

+ View this video
›Back To Top