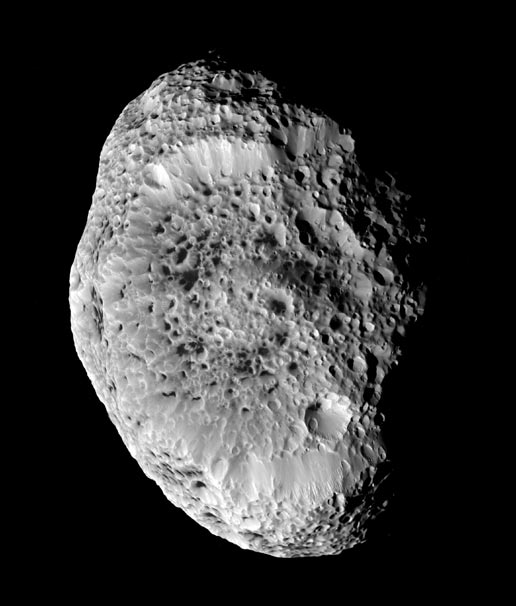 Saturn's impact-pummeled Hyperion stares back at Cassini in this six-image mosaic taken during the spacecraft's close approach on Sept. 26, 2005.

This up-close view shows a low density body blasted by impacts over the eons. Scientists originally believed that the spongy appearance of Hyperion is caused by a phenomenon called thermal erosion, in which dark materials accumulating on crater floors are warmed by sunlight and melt deeper into the surface, allowing surrounding ice to vaporize away.

Cassini scientists now think that Hyperion's unusual appearance can be attributed to the fact that it has an unusually low density for such a large object, giving it weak surface gravity and high porosity. These characteristics help preserve the original shapes of Hyperion's craters by limiting the amount of impact ejecta coating the moon's surface. Impactors tend to make craters by compressing the surface material, rather than blasting it out. Further, Hyperion's weak gravity, and correspondingly low escape velocity, means that what little ejecta is produced has a good chance of escaping the moon altogether.

At 280 kilometers, (174 miles) across, Hyperion's impact-shaped morphology makes it the largest of Saturn's irregularly-shaped moons.

Six, clear-filter images were combined to create this mosaic. Images were taken by the Cassini spacecraft narrow-angle camera at a mean distance of about 33,000 kilometers (20,500 miles) from Hyperion and at a sun-Hyperion-spacecraft, or phase, angle of 51 degrees. Image scale is 197 meters per pixel.