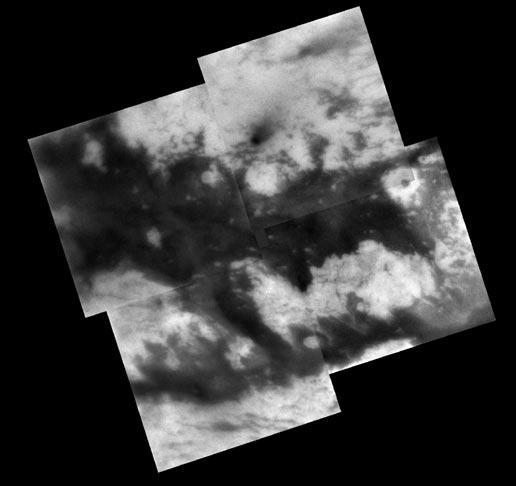 During its Sept. 7, 2005, flyby of Titan, Cassini acquired images of territory on the moon's Saturn-facing hemisphere that were assembled to create this mosaic.

Once known only as "the H" because the region looks something like the letter on its side, features in this region now possess provisional names assigned by the International Astronomical Union (see: http://planetarynames.wr.usgs.gov/). The northern branch of the H is now called "Fensal," while the southern branch is known as "Aztlan."

Fensal is littered with small "islands" ranging in size from 5 to 40 kilometers (3 to 25 miles) across. These landforms currently are thought to be water ice upland areas, surrounded by shallower terrain that is filled-in with dark particulate material from the atmosphere. A few larger islands are also seen, like Bazaruto Facula (near right, containing a dark crater), and several islands in western Fensal. When viewed in images of Shangri-La (on the other side of Titan), island-like landforms of this size tend to occur in clusters with apparent preferred orientations. The small islands in Fensal appear much more scattered (and most appear roughly circular), although a few islands do have an east-west orientation to their long axis.

Aztlan, on the other hand, appears comparatively devoid of small islands, with three large islands in its western reaches, plus only a few smaller islands. The largest of these islands is called "Sotra Facula" (just right of center in the bottom left mosaic frame), and measures 240 by 120 kilometers (149 to 75 miles) across.

The territory covered by this mosaic is similar to that seen in http://www.nasa.gov/mission_pages/cassini/multimedia/pia06222.html, which is composed of images from Cassini's March 2005 Titan flyby. However, the gaps between the images in this mosaic are smaller and fewer than in the earlier mosaic.

The mosaic is centered on a region at 7 degrees north latitude, 21 degrees west longitude on Titan.

These Cassini spacecraft narrow-angle camera images were taken using a filter sensitive to wavelengths of infrared light centered at 938 nanometers. They were acquired at distances ranging from approximately 200,600 to 191,800 kilometers (124,600 to 119,200 miles) from Titan. Resolution in the images is about 2 kilometers (1.2 miles) per pixel. Each image has been strongly enhanced to improve the visibility of surface features.