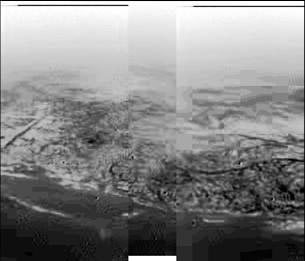 This composite was produced from images returned yesterday, January 14, 2005, by the European Space Agency's Huygens probe during its successful descent to land on Titan. It shows the boundary between the lighter-colored uplifted terrain, marked with what appear to be drainage channels, and darker lower areas.

For more information about the Cassini-Huygens mission visit http://saturn.jpl.nasa.gov/home/index.cfm .