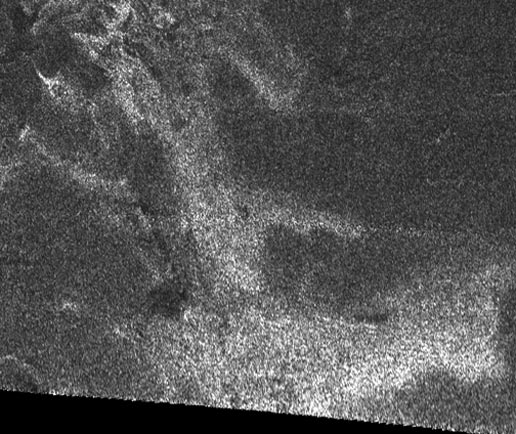 This synthetic aperture radar image of the surface of Saturn's moon Titan was acquired on Oct. 26, 2004, when the Cassini spacecraft flew approximately 2,500 kilometers (1,553 miles) above the surface and acquired radar data for the first time.

The radar illumination was from the south: dark regions may represent areas that are smooth, made of radar-absorbing materials, or are sloped away from the direction of illumination. A striking bright feature stretches from upper left to lower right across this image, with connected 'arms' to the East. The fact that the lower (southern) edges of the features are brighter is consistent with the structure being raised above the relatively featureless darker background. Comparisons with other features and data from other instruments will help to determine whether this is a cryovolcanic flow, where water-rich liquid has welled up from Titan's warm interior.

The image covers an area about 150 kilometers (90 miles) square, and is centered at about 45 degrees north, 30 degrees west in the northern hemisphere of Titan, over a region that has not yet been imaged optically. The smallest details seen on the image are around 1 kilometer (.62 mile) across. Features are less clear at the bottom of the image where the viewing was less favorable. A faint horizontal seam between the radar beams can be seen half way up in this image.

The Cassini-Huygens mission is a cooperative project of NASA, the European Space Agency and the Italian Space Agency. The Jet Propulsion Laboratory, a division of the California Institute of Technology in Pasadena, manages the Cassini-Huygens mission for NASA's Science Mission Directorate, Washington, D.C. The Cassini orbiter and its two onboard cameras were designed, developed and assembled at JPL. The radar instrument team is based at JPL, working with team members from the United States and several European countries.

For more information about the Cassini-Huygens mission, visit http://saturn.jpl.nasa.gov.