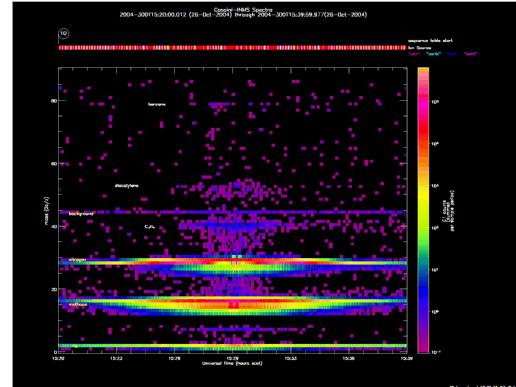 This graph shows data acquired by Cassini as it flew by Titan at an altitude of 1,200 kilometers (745 miles) on Oct. 26, 2004 - its closet approach yet to the hazy moon. The data is from Cassini's ion and neutral mass spectrometer, which detects charged and neutral particles in the atmosphere. The graph reveals a diversity of hydrocarbons in the high atmosphere above Titan, including benzene and diacetylene.

The Cassini-Huygens mission is a cooperative project of NASA, the European Space Agency and the Italian Space Agency. The Jet Propulsion Laboratory, a division of the California Institute of Technology in Pasadena, manages the Cassini-Huygens mission for NASA's Science Mission Directorate, Washington, D.C. The Cassini orbiter and its two onboard cameras were designed, developed and assembled at JPL. The ion and neutral mass spectrometer team is based at University of Michigan, Ann Arbor.