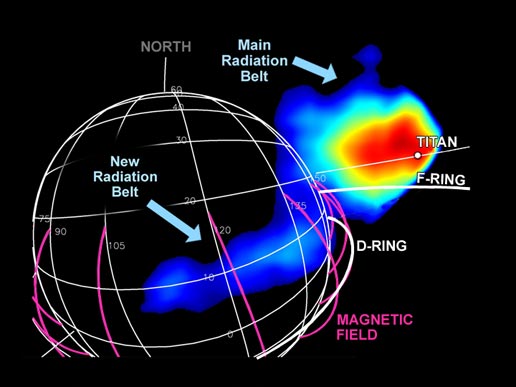 The magnetospheric imaging instrument onboard Cassini recently discovered a new radiation belt just above Saturn's cloud tops, up to the inner edge of the D-ring. Before this discovery, it was not anticipated that such a trapped ion population could be sustained inside the rings.

This new radiation belt extends around the planet. It was detected by the emission of fast neutral atoms created as its energetic ions interact with gas clouds in the same region. Saturn's radiation belts have numerous "holes" in them, created as the trapped ions collide with moons, dust ring, and gas. With this discovery, the radiation belts are shown to extend far closer to the planet than their previously known inner boundary, which lies just at the outer edge of the main ring system. The new belts are much smaller and much less energetic than the main radiation belts. The main belts extend from about 139,000 kilometers (86,000 miles) from Saturn's center out to about 362,000 (225,000 miles) and contain particles with energies up to tens of mega-electron volts. The new belt extends less than 6,000 kilometers (about 4,000 miles) in thickness, and is not known to contain particles above about 150 kilo-electron Volts total energy.

Shown here is an image taken by the magnetospheric imaging instrument on July 1, 2004, from a distance of 24,000 kilometers (14,900 miles) from Saturn's cloud tops. From blue to red the colors represent increasing intensity of the radiation. The location of the moon Titan in the image is shown, but emissions associated with Titan itself are too weak to stand out in the intense emission from the main radiation belt. The magenta lines represent the magnetic field lines that cross the equator just at the inner edge of the D-Ring, where the new-found radiation belt resides.

The Cassini-Huygens mission is a cooperative project of NASA, the European Space Agency and the Italian Space Agency. The Jet Propulsion Laboratory, a division of the California Institute of Technology in Pasadena, manages the Cassini-Huygens mission for NASA's Science Mission Directorate, Washington, D.C. The Cassini orbiter was designed, developed and assembled at JPL. The Magnetospheric Imaging Instrument was designed, built and is operated by an international team lead by the Applied Physics Laboratory of the Johns Hopkins University, Laurel, Md.

For more information about the Cassini-Huygens mission, visit http://saturn.jpl.nasa.gov and the instrument team's home page, http://sd-www.jhuapl.edu/CASSINI/index.html.